'Attack of the Giant Leeches' is boredom

A small town located on the edge of a swamp and inhabited primarily by unpleasant hicks is menaced by giant leeches. Will the studly game warden (Clark)--one of three citizens with a double-digit IQ--save the day?

"Attack of the Giant Leeches" is one of those movies where the various characters can't get eaten by the monsters soon enough. This is partly because they're portrayed by second-rate actors delivering badly written dialogue, but also because the film is just plain boring.

The movie reaches its high point when the local shopkeeper (Bruno VeSota) chases his wife (the town slut, played by Yvette Vickers) into the swamp after catching her with one of her lovers. There's some genuine tension and suspense in that scene, and it's the only bit that materializes in the entire movie. 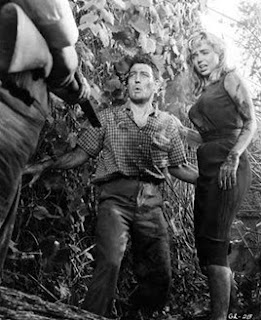 (Later scenes might have had some suspense to them, but it's ruined by the fact the "giant leeches" are obviously plastic and their suckers look more like eyes than suckers. They effect is not one of horror but one of goofiness.)

There is one important lesson to be taken from this film: If you think you are hearing an angry leopard or wildcat while wandering through a swamp, it's probably just the mating cry of a giant leech.

I suppose, in fairness, I should acknowledge the fact that the movie lets us oogle a sexy chick getting dressed as her slobby husband oogles her getting dressed. I guess that's a little bit of entertainment value right there. 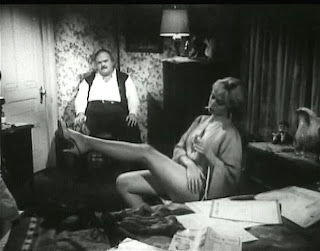 (Although it did make me wonder: Do most women really put their shoes on before they've even finished putting on the rest of their clothes? It seems like they always do it that way in the movies....)