Here's Debbie Reynolds, wearing a Sexy French Maid costume and hugging a pumpkin. It doesn't make any sense whatsoever, so this is an all-in-one Trick-or-Treat? 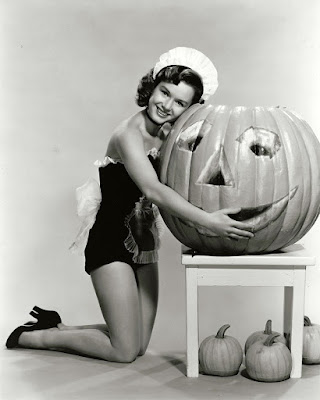 No matter what, though, she seems like she's ready for Halloween! How about you?
Posted by Steve Miller at 9:09 AM 1 comment:

Myrna Loy is checking the cards. She thinks they are foretelling a frightfully fun Halloween for you and your friends! Are you ready? 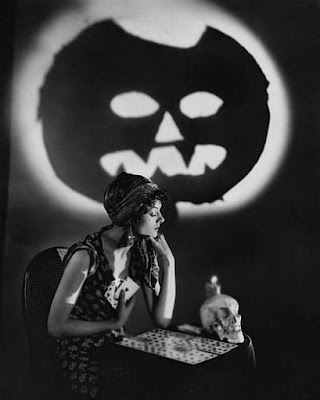 Meanwhile, lots of preparations and rushing on brooms is taking place here at Shades of Gray! Like Anne Jeffreys, we're counting down the minutes to the Big Day! 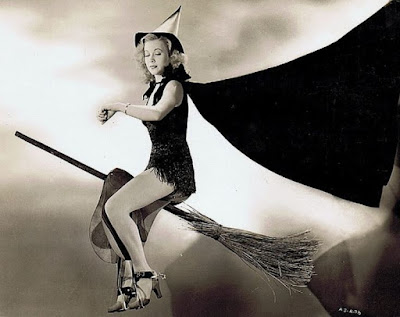 Posted by Steve Miller at 9:22 AM No comments:

Halloween is coming, and here's something to help get you in the mood!

For the past several years, over at the Terror Titans blog, I have posted a short horror film every day in October. While preparing this year's line-up, I came across "Revestriction," a short film that won awards at the Cannes Film Festival in 1990.

Seeing that it's in black-and-white and a fabulous pastiche of the low-budget horror films from the 1950s and 1960s--many of which you'll find reviewed here--I thought this was the best place to share it with all of you.

I'll be posting more Halloween treats randomly throughout this month, but you can get a regular dose of horror by stopping by Terror Titans every day after 4:44pm (Pacific Time) from now until the Big Day on October 31!
Posted by Steve Miller at 12:00 AM No comments:

... and Nancy Carroll is slightly annoyed that the Spirit of Halloween is already bugging her for candy.

Are you getting ready for Halloween? 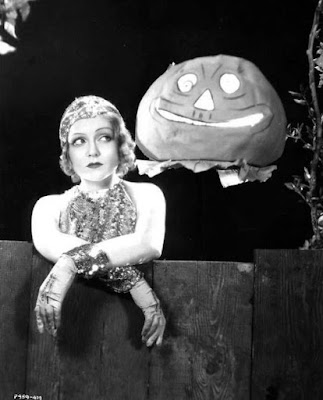