Incarna Comics publishes several "retro" titles... and one which is in the early stages of development is Diana Danger, Space Ranger. Here are some portraits of the title character, who keeps alive the tradition of space-faring women in tight suits and fishbowl-like helmets!


For up-to-date info on Incarna Comics, visit their Facebook page here.
Posted by Steve Miller at 12:03 PM 4 comments: Links to this post

Here's hoping no one tears through your heart the way Ann Miller has gone through the one in the picture. 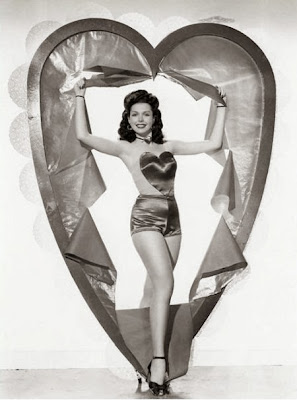 Early in 1948, Eastern Color Printing published the first issue of Club 16, a humor anthology series focused mostly around high-schoolers and young professionals. The quarterly title lasted four issues, and it was gone again by year's end.

From the first issue ot the last, one of the features was "Ginger and Snap." Ginger and Snap were fraternal twins and each story saw them trading places or otherwise impersonating each other. Since Ginger was a girl and Snap was a boy, all the stories feature light-hearted exploratons of gender role reversals. "Cute' is the perfect word to describe the stories by Mickey Klar Marks and the illustrations by Dave Tendlar, and not in a sarcastic way.

I immediately developed a fondness for "Ginger and Snap" when I discovered the series during one of my hunts for comics for NUELOW Games to re-publish as part of its comics/rpg hybrid line. It's not like anything else we've put out, so the Trading Places Twins are getting a book of their very own. Here's the splash page from the first story, as it will appear in NUELOW's "Ginger and Snap." (Click on the image for a larger, more readable version.)


When I made a post similar to this in a Facebook forum, announcing the plans to do a "Ginger and Snap" book, one of the commentors said,"Where the mind goes by today's standard would make a book like this a little ...,"

And he's right. If Ginger and Snap were to be fully rebooted instead of just re-issued, it would probably look something like this:


Look for Ginger and Snap, later this week from NUELOW Games. Meanwhile, click here to check out the other comics offerings... guaranteed better than 99 percent of the crap currently at your Friendly Neighborhood Comics Shop.
Posted by Steve Miller at 8:04 AM No comments: Links to this post