As the first entry in the Milla Jovovich Quarterly of '13, we bring you a picture of Milla at 13. (The picture is from 1988... if the hard rock hair wasn't enough of a hint.) 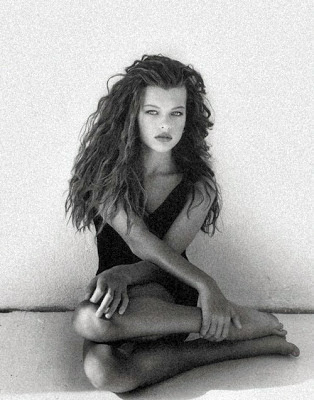 'The Frozen Ghost' ventures forth
frrom the Inner Sanctum

When a heckler dies during one of his performances, a celebrated stage mentalist (Chaney) becomes convinced that he has a genuine ability to kill people with his mind. He retreats from public life and into the refuge of a wax museum run by friend (Vergougo) while his agent (Stone) and fiance (Ankers) try to help him deal with guilt and delusions. But when strange events start occurring at the museum, including the disappearance of its owner, he grows ever more convinced of his supernatural powers... while the police become ever more convinced that he is a murderer. 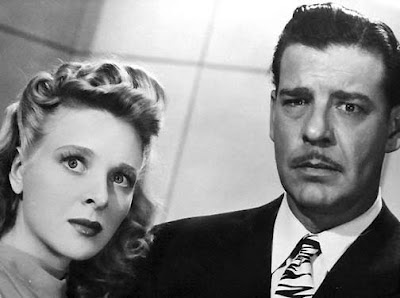 "The Frozen Ghost" is the fourth entry in Universal's "Inner Sanctum" series starring Lon Chahey Jr. in a different role each time (with frequent co-star Evelyn Ankers similarly showing up in several of them). It's another quirky mystery that walks the line between thriller and horror while delivering a series of twists and turns, some of which will be not be surprising to most modern veiwers both others are as effective now as they were in 1945 when the film was first released.

Lon Chaney Jr. is in fine form as the tortured and perpetually confused Alex Gregor, as he basically spends the film as a sad-sack whose life keeps collapsing in the most nightmarish ways--be it on the professional, romantic, or completely mundane front. Gregor is a character who can't even go for a walk without some horrible development cropping up to make him even more miserable... and to make it even more certain that he is doomed.

On first glance, it might seen a little overkill that have a mentalist with apparently real psychic powers hiding in a creepy wax museum with an even creepier staff who may or may not have sinister motives, and who has friends who may or may not be trying to hide bad intentions behind their helpful smiles, but it works here. The film remains engaging and entertaining from beginning to end. Fans of Chaney and of classic Universal horror and mystery films should check it out.

Posted by Steve Miller at 10:26 AM No comments: Links to this post