Cover pic for the next NUELOW Games release

"ROLF!: The Grim Reaper vs. the Fertility Goddess" will be released late today or early tomorrow via my online outlet at RPGNow.com, but in the meantime, here is the cover illo. 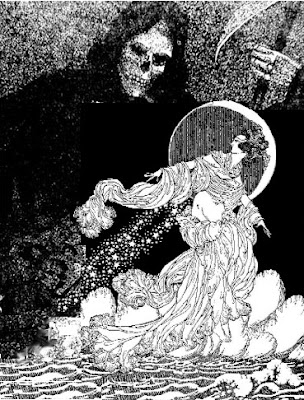 Posted by Steve Miller at 11:53 AM No comments: Links to this post

Tintin in the Land of the Soviets

Tintin in the Land of the Soviets (Little-Brown 2007)
Writing and Art: Hergé
Rating: Six of Ten Stars

Tintin, a young Belgian reporter, travels to the Soviet Union during the late 1920s to report on the socialist government of Joseph Stalin. He uncovers vast corruption in the "workers' paradise" and becomes marked for death by Stalin's secret police, prompting a string of adventures as he escapes back to Belgium. 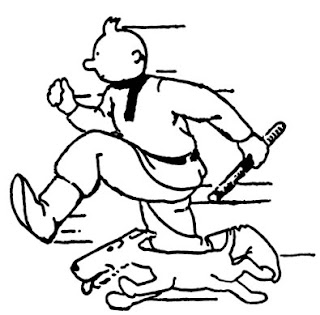 "Tintin in the Land of the Soviets" was the first tale of the intrepid "boy reporter" and his dog Snowy that Herge wrote and drew. It is different in tone and style than all works that followed, and it is clearly the product of an artist still mastering his craft, not to mention finding the proper tone for the series that became his most celebrated.

Originally serialized in magazine from in 1929 and 1930, and published in book form shortly after completing its magazine run, Herge later a low opinion of this work. It's the only one of the 23 completed Tintin adventures that Hergé did not subsequently redraw in a color edition and/or update with more modern panels and references as the years went by. In fact, for decades, Herge blocked any efforts to republish "Tintin in the Land of the Soviets," and it wasn't until 1989 that he allowed an English translation of the book.

The style of story-telling "Tintin in the Land of the Soviets" is very different than the later stories that almost all saw some degree of revision by Herge over the years. It's closest in tone to "Tintin in the Congo" and "Tintin in America," which, if you read those three early works back-to-back, you can see the evolution of Tintin, even though Herge revised the two latter ones for later editions.

And, the art here is also far cruder than anything else I've ever read by Herge--it is barely recognizable, in fact. That said, I've never seen the original "Tintin in the Congo" nor "Tintin in America", but only the revised color versions. (And it's been 35 or so years since I read "Tintin in the Congo... and I'm not likely to get my hands on a copy again any time soon, as the hystrionics of the politically correct crowd and over-sensitive cry-babies successfully blocked its paperback re-issue back in 2008.)

The overall style is also more in line with newspaper comic strips of the 1920s and 1930s rather than the action-adventure of later Tintin stories. While there are some serious matters addressed--such as the portrayal of the Soviet government as murderous, corrupt, and predatory toward the people they were supposedly protecting and serving, portrayals which history has shown to be mild when compared to reality--the over-the-top cartoon action is what is most memorable about the book... and which is not found on this level in later works. Scenes where Tintin builds a plane over night or is frozen solid after wet from a river into the cold Russian night are almost without equal in Hergé later Tintin efforts, with the possible exception of the major city being built overnight or some of Tintin's interactions with Indians in "Tintin in America."

Still... if you like Tintin, you're bound to like this book. I don't think Hergé ever told a bad Tintin story.

Posted by Steve Miller at 11:45 AM 2 comments: Links to this post

I'd never heard of DeStorm (a YouTube channel for an up-and-coming musician/comedian) or Epic Meal Time (a YouTube gonzo cooking channel with a bacon focus) before I stumbled across this video where these these two YouTube Channel owners teamed up for an Epic Rap Bacon Crossover. However, I have to delve deeper into their respective works, because this rap song and video is a lot of fun. Not to mention very arty, what with it being in black and white and all. :)

(The video was directed and produced by Mike Diva.)
Posted by Steve Miller at 12:02 AM No comments: Links to this post

Year of the Dragon 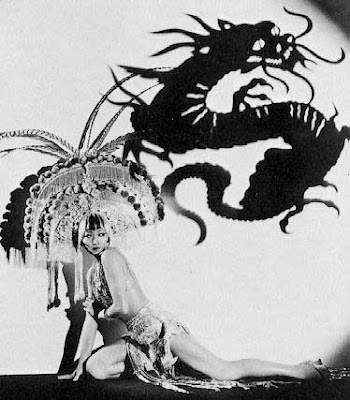 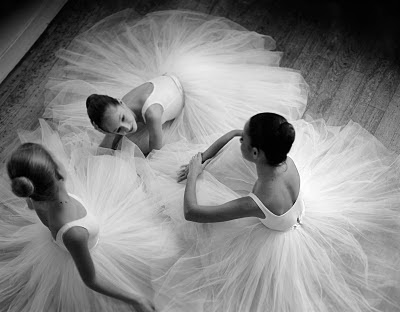 "The Three Dancers" by Neil Folberg. Click here to see more of his work.
Posted by Steve Miller at 12:01 AM No comments: Links to this post

Here's a small sampling of work by artist Don Hudson. 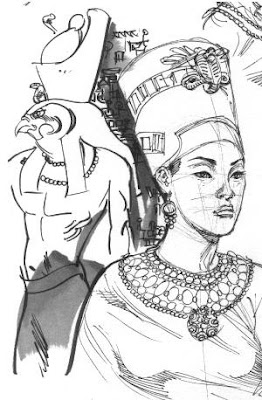 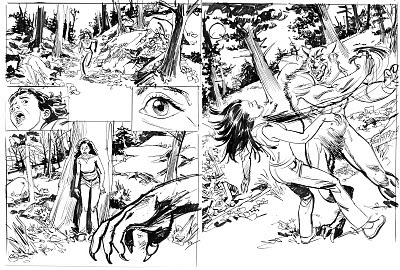 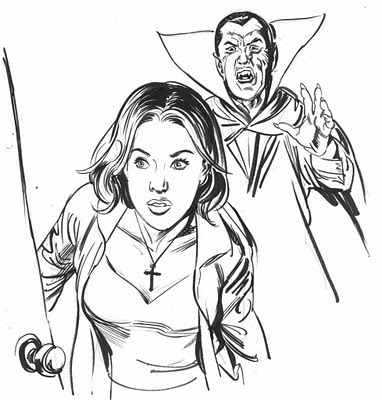 Posted by Steve Miller at 8:08 AM 2 comments: Links to this post

While grabbing YouTube videos for my job application for the Department of Homeland Security, I came across this mostly black-and-white and occasionally clever video for a mash-up of classic 1980s pop tunes "Thriller" and "Somebody's Watching Me". 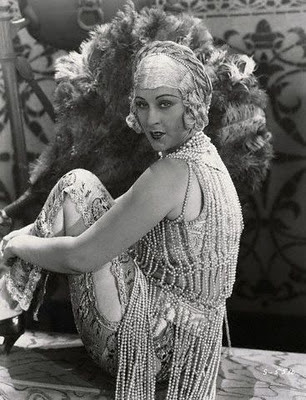 Anita Garvin is a nearly forgotten comedienne who was a frequent co-star of Stan Laurel and Oliver Hardy in silent movies during the late 1920s before they were a formal comedy team. She made a successful transition from the silent era to the talkies, but but by the late 1930s, she was ready to quit acting to raise a family.

Stan Laurel convinced her to delay her retirement long enough to join him in remaking one of their last silent films together, "From Soup to Nuts", as a segment in the 1940 film "A Chump at Oxford", with Oliver Hardy joining them in reprising the roles they had originally performed in 1928.

In her day, Garvin as a queen of slapstick comedy who could give any of her more famous male co-stars a run for their money in just about any area. Hers is a face and body that any fan of classic comedies is sure to admire if they keep an eye out for her.

'A Chump at Oxford' is funny but infuriating

A pair of down-on-their-luck laborers (Laurel and Hardy) receive a scholarship to Oxford as a reward for foiling a bank robbery. They are greeted with cruelty by the snobbish student body until one of them is revealed to be the long-lost Lord Paddington. 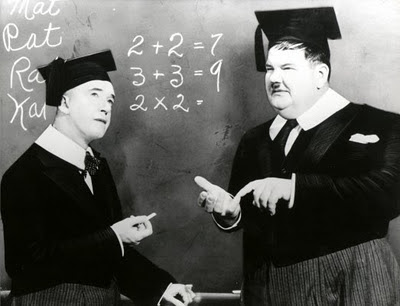 "A Chump at Oxford" is the first Laurel and Hardy film I've seen where I remember being irritated. I wanted the collection of entitled, self-important jerks who decide to make their lives Hell when the arrive at Oxford to get what they dished out ten-fold, yet they never seem to be adequately punished to my mind. While Stanley beating them up after he regains his memories as Lord Paddington is a good start, but nowhere near enough--I wanted to see them tossed out of the school, not just out a window.

The rest of the film more than makes up for it though. From the pair's attempt to work as domestics at a fancy mansion through the various bits at Oxford--even if they were mostly brought on by mean tricks--are all very funny. An added bonus for Peter Cushing fans is that you can see him in an early role as one of the cruel students... it's not a big part, but he's there. And he's the only one who doesn't get to wear a silly mustache when the gang is passing themselves of as professors to Stan and Ollie.

An interesting note about this film is that it was originally intended to be released in two versions--a 40-some minute version for the American market an a 60-some minute version for Europe. The first part of the film--where Laurel and Hardy work as servants at a fancy party--was to have been omitted in the American release.
Posted by Steve Miller at 8:30 AM 1 comment: Links to this post 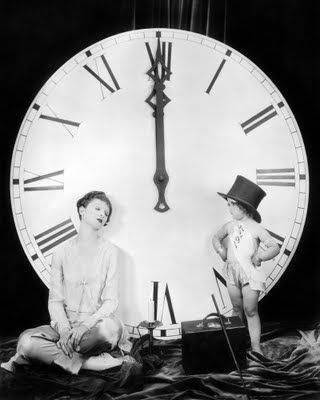 The New Year can be as impatient as she wants, but, while time keeps slipping into the future, the images of Myrna Loy stays here forever.
Posted by Steve Miller at 12:01 AM No comments: Links to this post