The annual Countdown to Halloween is about to begin!

This year's Countdown to Halloween will be hosted by Vampirella (with a bunch of her friends and colleagues pitching in). She's almost ready to go! 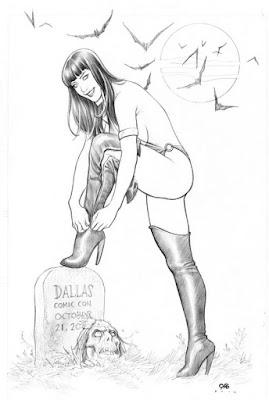 More artist's conceptions of what the Rover will see when it makes contact with the Martians!

Through an arrangement with Marv Wolfman, NUELOW Games recently published a collection his "Love Witch" stories. These were originally published by Skywald back in the early 1970s. Here are a couple sample pages.

The book featuring the comics is titled, not surprisngly, "Love Witch." In addition to the two fantastic excursions into dark fantasy that is "Love Witch," the book features a third Wolfman fantasy story--"Cassandra of the Seventh Wind"--and an RPG section by yours truly that lets you bring Cassandra and the Love Witch's magic to d20 System campaigns.

"Love Witch," however, isn't the only work by Wolfman that graces NUELOW's line-up of titles. He also wrote the comics featured in NUELOW's "Monster Monster: Soul Drinkers" (which contains RPG rules by Andrew Pavlides that translates the creature featured in Wolfman's story to D&D 5th Edition), and in "Lady Satan 2004" (where you will find d20 System game rules that let players create characters who are the literal children of Satan, designed once again by yours truly). Here are sample pages from those books:


Click here to see additional previews of these three great titles,  or to get your own copies of them.

They are part of NUELOW Games's ongoing effort to put unjustly forgotten comics for year's past in front of new readers. Each title includes the comics, together with all-new roleplaying game material and fiction inspired by them. Click here to see the complete line-up of NUELOW's comics/rpg hybrid titles. You may find your new favorite comics among them.
Posted by Steve Miller at 5:17 PM No comments: Links to this post

The first offering this time out is the image for a Wonder Woman cover that caused a stink and led Frank Cho to quit was supposed to be a 12-issue gig doing WW covers:


Posted by Steve Miller at 12:00 AM No comments: Links to this post