"The Death Kiss" is one of my all-time favorite old movies. It's a fast-paced mystery with some clever twists and turns, well-written dialogue delivered by a top-notch cast, and a comic relief character that's actually more funny than annoying; if you're a lover of old B-movies, you know how rare that is. 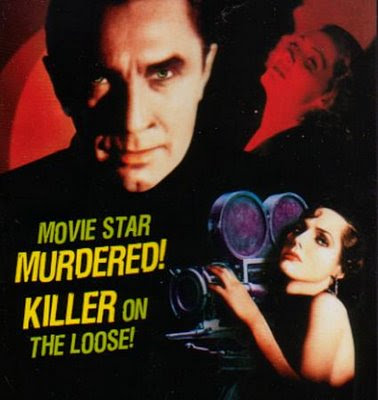 For film buffs, "The Death Kiss" provides not only an hour's worth of quality entertainment, but a look into the working life on a studio lot, as the characters are mostly actors, technicians, or studio executives in the process of making a movie that ahares its title with this one. Additionally, it features a re-teaming of the stars of Universal's "Dracula"--David Manners, Edward Van Sloan, and Bela Lugosi. They are playing very different characters here than in their previous collaboration. Further, Manners and Van Sloan both give far better performances here than they did in "Dracula.

I hope you have the time to check out "The Death Kiss".. I'm sure you'll enjoy it! Click here to read my review of it, or go straight to the film below.

A fun horror comedy undeserving of the scorn heaped upon it

Abbott and Costello (Abbott and Costello) are a pair of down-on-their luck adventurer who try to get a job escorting an an archeological shipment as their ticket back to the US from Cairo. However, before they secure the job, the archeologist is murdered, the most important part of his find goes missing--the mummy Klaris--and Costello ends up with an ancient medallion that is the key to unlocking a lost treasure. Soon, the hapless pair are the the targets of every shady character in Cairo, including rabid cultists sworn to protect the treasure, a dangerous femme fatale (Windsor) who will do anything to possess it, and even the risen mummy himself (Parker). 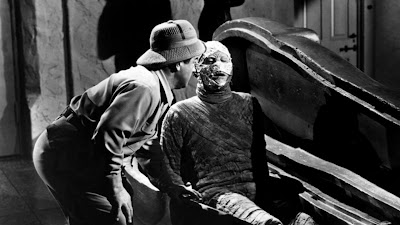 I don't think "Abbott and Costello Meet the Mummy" deserves quite the level of scorn that most reviewers seem to heap on it. While Abbott and Costello certainly aren't at their best in it, it is a very amusing spoof of the string of mummy movies from Universal--and those films that would follow when the British studio Hammer returned to that same oasis a few years later--and it's got plenty of hilarious moments. (The "pick-pocket routine" where Costello visits the villainess in her den, the chase scene in the secret hideout of the mummy cultists, and the various bits with the multiple mummies at the movies climax are all comedic highpoints that should evoke chuckles from even the most jaded viewers.)

The film is far from perfect, however. I already mentioned that Abbott and Costello aren't exactly at their best in this film--which was, in fact, one of the last times they worked together--and an attempt to reinvent the classic "who's on first" routine with some digging impliments is about as uninspired as I think the pair's work ever got. Finally, the mummy costume in the film is about the worst that I've ever seen--and not at all worthy of even the cheapest film from Universal Pictures.

I recommend "Abbott and Costello Meet the Mummy" to lovers of the classic monster movies who have a sense of humor about them, as well as fans of classic comedy. There are better examples of this type of film out there, but this one still has enough good bits to make it worth seeing.

--
An interesting quirk about this movie is that while Abbott and Costello are listed in the credits as playing characters named Pete and Freddie, they refer to each other by their real names throughout the piece.
Posted by Steve Miller at 11:12 AM No comments: Links to this post

Your guess is as good as mine...

... but maybe someone called Alice White an airhead one too many times? 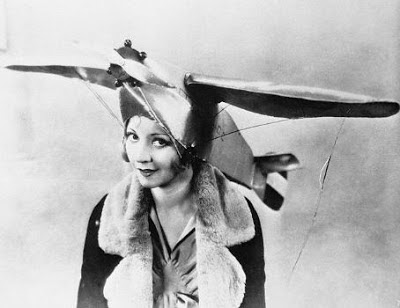 Posted by Steve Miller at 8:58 PM No comments: Links to this post

June Collyer is trying to seduce summer to get over here and stick around! 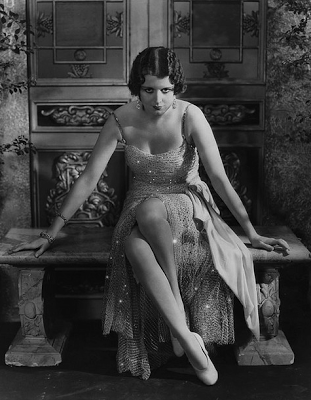 Classic Cinema: The Drums of Jeopardy 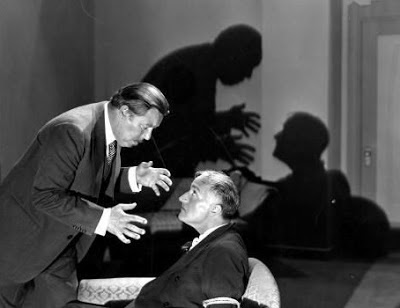 It's Friday, so it's time for me to bring you another of my favorite classic (and woefully neglected) films. This time out, it's "The Drums of Jeopardy," a neat little thriller from the early days of talkies starring the great Warner Oland and the under-appreciated and all-but-forgotten June Collyer. (I'm a big fan of Collyer, which is why she's the unofficial mascot of my game company, NUELOW Games, and why she has more posts devoted to her here than any other actress, save Milla Jovovich..)

By the way, don't let the wildly inappropriate music during the opening credits foll you. This is not some sort of comedy or romance picture. It;'s full of vengeful Russian mad scientists, murders, and death traps! So... sit back and enjoy the film. If you like, you can read my review of it first by clicking here. (There are actually few things I would love more than be able to re-score some of those old movies with more appropriate music. I think it would give them a stronger appeal with modern viewers.)


Posted by Steve Miller at 9:30 AM No comments: Links to this post

The Art of Dan Adkins

It is with a touch sadness that I make this post, as I have had word that another of the great comic book artists, Dan Adkins, has just passed away at the age of 76. 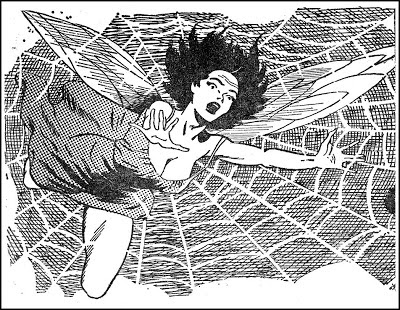 Adkins was a skilled and talented penciler and inker, and I don't think there's a major comic book character created before 1980 that his pencil or brush didn't bring to life. There also isn't a penciler over whom his inks didn't look great--and he did finishes over some 70 different artists during his career. In addition to his comic book work, Adkins drew illustrations for sci-fi and horror magazines such as "Amazing Stories" and "Famous Monsters of Filmland".

Artist Jerry Bingham wrote an excellent piece about how Adkins helped him along at the very beginning of Bingham's own career. I am reposting it here with Jerry's permission. A gallery of Dan Adkins's art follows.

It's easier to comment on the passing of distant relationships than on people I cared about. Such is the case with Dan.

In 1977, I had been out of the Air Force for a year, and I had been turned down at all my attempts to get work drawing comics. After my third trip to the Marvel offices with new samples, kindly art director, Marie Severin, told me of a guy she knew who had helped a number of young artists break into the business. He lived just across the river in New Jersey. She gave me his number.

He was a quirky little guy with an exceptionally sweet wife and young boy, who set me up with a drawing board in his living room, invited me to sleep on his couch for a week, then proceeded to do everything in his power to discourage me from a life in comics.

But he critiqued as I drew. Then he took me into NYC, introduced me to Archie Goodwin, who gave me my first job. And he introduced me to Joe Orlando at DC. He even took me up to Neal Adams's office (who critiqued me harshly and shooed us on our way).

Then Dan told me of his plans to move to Reading, PA, and asked if I wanted to come with. What else did I have going for me? He introduced me to Steranko. My wife and I moved into the apartment downstairs from the Adkins family and we became very close for a short time. He had a story for every occasion and, no matter how outrageous, he could entertain and appall at the same time. I moved out a few years later. We lost touch. Life happened.

I sent flowers when his wife Jeanette passed a few years ago, and I remember remarking in private that I wondered how he would survive without her. His family was his whole world. I am extremely saddened today with the news of Dan's death.

Dan Adkins will always be "That Guy" for me, the guy who was there when I really needed someone just like him to nudge me to the next rung on the artist's evolutionary ladder. Point me down the right hall. He introduced me to many other things I needed: other artists I was unaware of, famous NY bookstores, and he let me glimpse snippets of possible futures for myself, and let me understand what I didn't want to be, as well as what my possibilities were.

Life is full of regrets. I will always regret that I did not maintain our friendship over the years. He was there for a short time, and then he was not. But he was enormously influential. And I will always care for him in my heart. 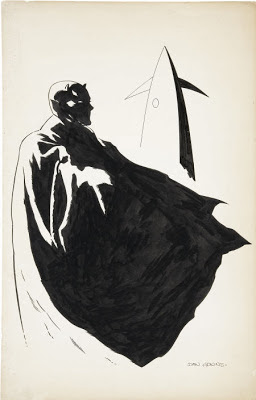 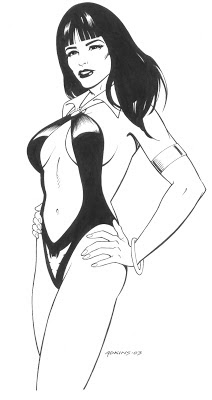 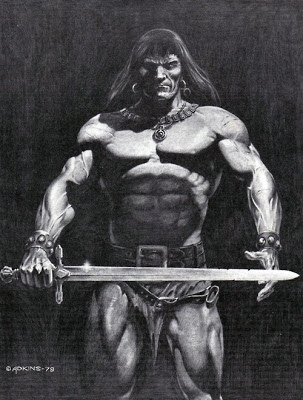 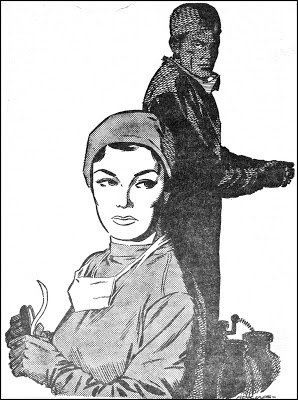 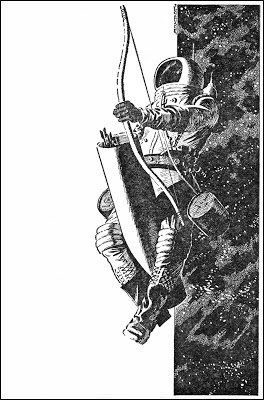 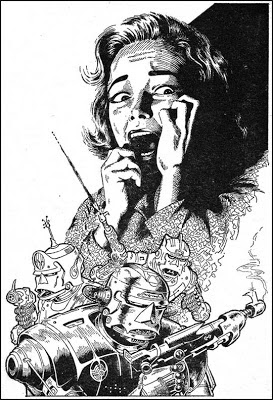 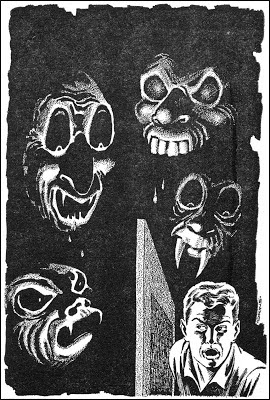 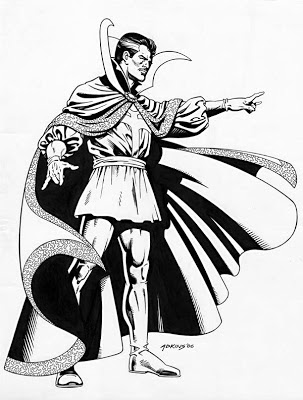 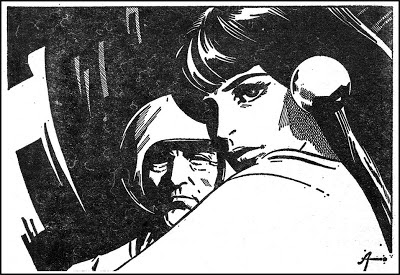 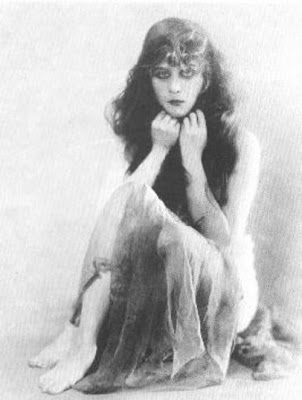 During the late 1910s and early 1920s, Theda Bara emerged as a hugely popular movie star, specializing in playing evil and creepy women. Her film career began when she was 30, around the age when actresses were considered "too old" for anything but matronly parts, and she went onto star in numerous mega-hits that helped make Fox Studios into a Hollywood power-house. She retired from acting at the age of 41, after marrying director Charles Brabin. Her final film, "Madame Mystery" (1926), was co-directed by Stan Laurel. 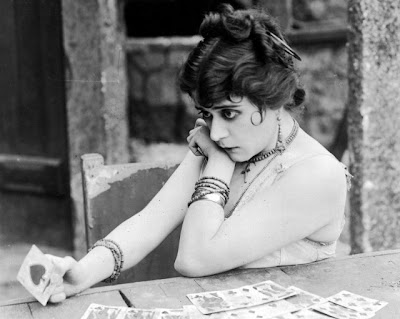 Bara has the distinction of being the world's first fabricated off-screen personality. Her official bio from Fox Studios claimed that she was a life-long dabbler in the occult who had been born in he shadow of the Sphinx--the product of a torrid love affair between an artist and an Arabian princess. The truth was that she had been born in Cincinnati to a tailor and a housewife and that she had been a struggling actress on Broadway before getting her first big film break in the 1914 picture "A Fool There Was." Her real name was Theodosia Burr Goodman.

Bara, with her dark, entirely fabricated public image and her heavy, almost panda-like eye make-up, also has the distinction of being history's first Goth Chick. 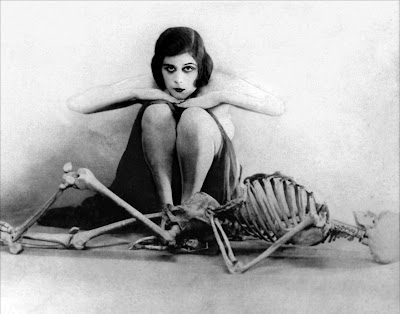 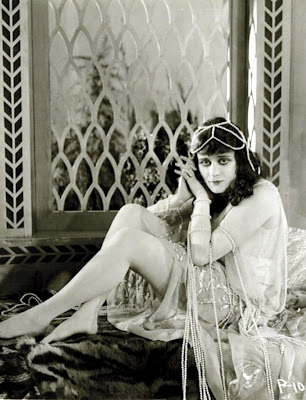 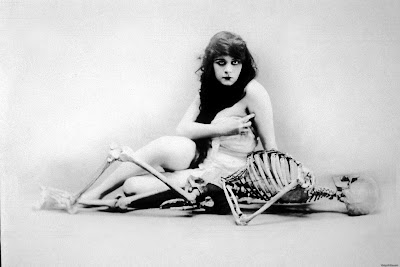 Only two of Bara's films survive to present day--strangely enough her career bookends of "A Fool There Was" and "Madame Mystery." The original prints for the rest, including her celebrated starring turns in the smash-hit costume dramas "Cleopatra" and "Salome" were destroyed in a fire at Fox Studios in 1937. Bara's personal copies of her films all fell victim to her lack of knowledge regarding proper storage of nitrate-based film stock; she discovered to her sorrow in the 1940s when she checked her library that the passage of time had literally reduced her films to dust..

Theda Bara passed away at the age of 69, Although she has sunken into obscurity, she remains a source of inspiration for Goth Chicks, and was almost certainly the point of origin for the silent movie star turned evil undead cult leader in "The Dead Want Women."

Although I can't help but wonder if she wouldn't prefer to be remembered like this: 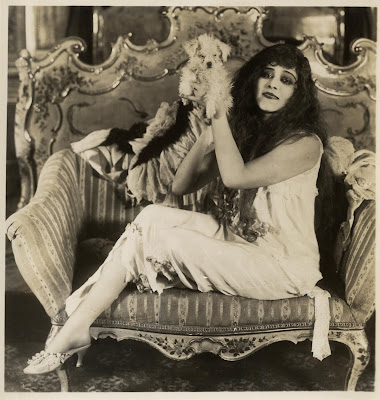 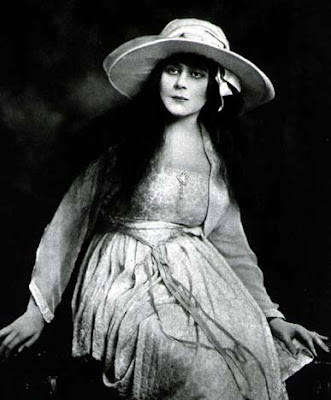 Posted by Steve Miller at 12:21 PM 4 comments: Links to this post