It's time for the weekly visit from the Space Girls. Click on the images for larger, more legible versions. 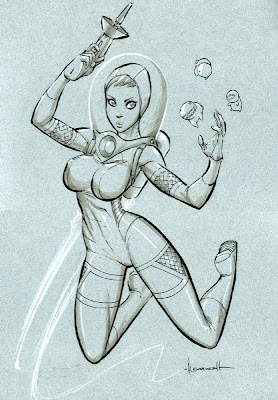 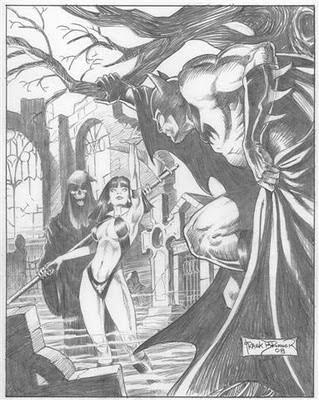 Starting on October 1 and continuing until October 31, it's the Countdown to Halloween with Vampirella. And not even Batman can stop it!
Posted by Steve Miller at 12:01 AM No comments: Links to this post

'One Girl's Confession' is barely worth hearing

Tempered by the school of hard knocks from an early age, Mary (Moore) robs $25,000 from her mobbed-up employer out of revenge for him ruining her father many years earlier. She then confesses to the theft, but never reveals where she hid the money, so she is sent to prison where she is safe from retaliation. All she has to do is serve her time and then quietly retrieve the hidden fortune once she is released. But when the kindness shown to her by a professional gambler (Haas) inspires her to share the money with him to help him out of a tight spot, and he appears to repay her by stealing the entire secreted fortune, she sets out get "her" money back or to gain revenge. 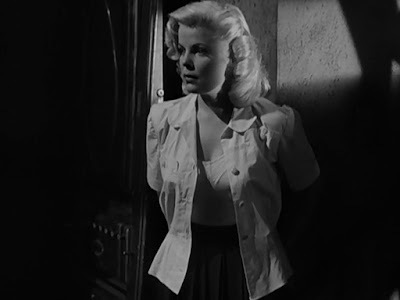 I imagine that in 1953 "One Girl's Confession" had all the plot twists and reversals to keep viewers satisfied. Further, the acting is good, the cinematography is serviceable, and the direction is steady and well-focused. Personally, I think that Cleo Moore's character of Mary was a little too quick to develop such trust in Hugo Haas' character given her background, but if one accepts the idea that she was just a little girl at heart looking for decent father-esque figure.

But nearly seventy years later, the film's story comes across as feeling too straight-forward, too pat, and under-developed. When watching it, there are numerous complications that seem to be set up as the story unfolds, but which are brought to fruition. The mob angle is dealt with kinda-sorta, but it feels too easy for someone watching the film in 2011, and there are a couple of characters that are just begging to be revealed as duplicitous or as something other than what they appear to be on the surface. But, without spoiling anything, I can tell you that whatever twists you THINK might be coming, you'll only get a tiny fraction of the proverbial "storm" can one would expect to come down on Mary's head as she moves to collect the money she's "worked for."

Now, the plot twists that do materialize are all well-executed, and the signature "ironic twists" in a Hugo Haas picture are here in spades, but as "The End" flashed on the screen, I was left feeling like I'd somehow been short-changed. This isn't exactly a bad movie, it's just a little tame.

I suppose it might be a nice, light-weight introduction to the film noir genre if you have a 11-14 year-old girl in your household with a love of crime fiction and mysteries (and the same might be true of a boy, but I think it might be less likely), but I think time has left this movie behind as entertainment for adults. I'd move to hear other opinions, though.

Posted by Steve Miller at 7:07 PM No comments: Links to this post

Psychic or Psychotic? That's a question for a
'Seance on a Wet Afternoon'

A spineless husband (Attenborough) is bullied by his would-be-celebrity medium wife (Stanley) into kidnapping the daughter of a wealthy industrialist and demand a ransom, so she can use her "psychic powers to save the child. As he executes the hoax, he starts to fear that his increasingly delusional wife will cause the girl's death. 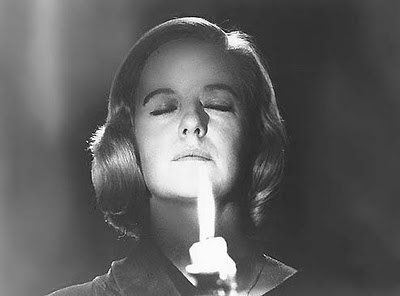 This is a slow-moving, deliberate, and decidedly talky psychological thriller where the fate of a naive child rests entirely in the hands of a man too weak to either stand up to his unhinged wife, or to get her the help she needs. In the end, his weakness brings a predictable doom down upon him, but the way its executed is brilliantly done.

With the only remotely action-oriented scenes being the ones surrounding a ransom drop and the nominal hero of this tragic story's efforts to avoid the police, this is a film that succeeds due to the superior acting abilities of the cast and the well-crafted script they had to work with. If a lesser performer than Kim Stanley--as a psychotic woman who has been encouraged in her delusions of a psychic gift since childhood and who now is driven to desperate measures to gain the recognition she believes she deserves--had been portraying the part, this is a character who would come across as ridiculous instead of sinister and obnoxious instead of pity-worthy, despite the depth of her madness and evil.

Similarly, if a lesser actor than Richard Attenborough had been playing the wimpy, conflicted Billy--with brilliant subtlety in contrast to Stanley's over-the-top, in-your-face performance--he would have come across as sniveling instead of distraught and disgustingly pathetic instead of deeply sympathetic.

Although this is film with virtually no likable characters--with the exception of the kidnap-victim played ably by cute child actress Judith Donner--Attenborough and Stanley nonetheless make us care about the people they are portraying. (The cops come across as basically unlikable, because as the film unfolds, we become emotionally invested with Billy and his wife, so we them from their point of view.) We want Billy to grow a spine and to do what he knows is right before it's too late for him and the innocent child.

And we are kept guessing up to the very last moment of the film whether Billy's weakness has turned him from kidnapper to killer, with one final tense scene and seance on the titular wet afternoon.

This is an excellent film that anyone who appreciates psychological thrillers should seek out.


Posted by Steve Miller at 2:30 PM 3 comments: Links to this post

Posted by Steve Miller at 12:01 AM 2 comments: Links to this post

Our thirteenth trip to Mars for an audience with the beautiful princesses that dwell there is the first to take place on a Wednesday.

Posted by Steve Miller at 12:33 AM No comments: Links to this post 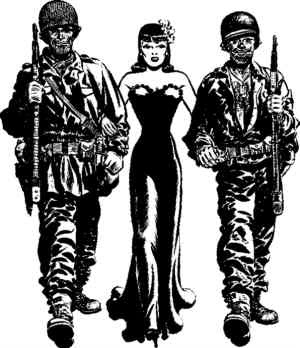 What has the gang from Merrie Melodies been up to? The answer lies here, in these animated music videos for tunes from the Dead Pirates by French artist Matthieu Bessudo (aka McBess). 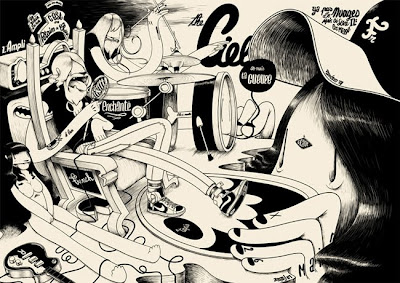 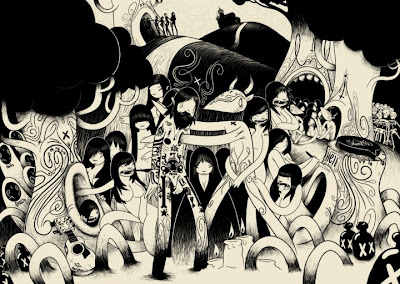 Click here to see more drawings by McBess.
Posted by Steve Miller at 9:45 AM No comments: Links to this post

It's Friday, so that means another visit from the Space Girls!

Given that this is Picture Perfect Wednesday, I thought I'd post my latest, greatest piece of "art." 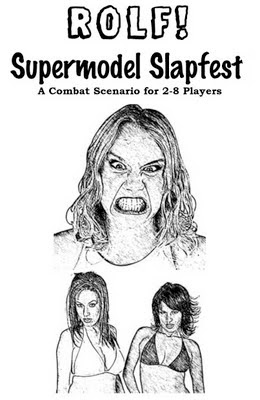 It's the cover for "Supermodel Slapfest," the latest supplement for "ROLF!: The Rollplaying Game of Big Dumb Fighters". It will be available from RPGNow and DriveThruRPG a little later today.
Posted by Steve Miller at 11:30 AM No comments: Links to this post 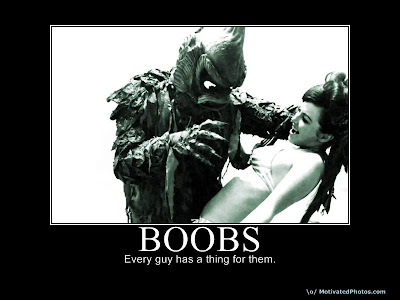 Paul Decker (Van Eyck) constructs the perfect locked-room murder by drugging his wife and filling the sealed room with gas while he hides under the floor breathing through a snorkel connected to fresh air via tubes in the outside wall. He remains hidden until the body has been discovered and taken away, and with everyone believing he is across the border on business, he seems to have the perfect alibi. Everyone that is, except for his teenage step-daughter Candice (Miller) who is convinced he murdered her. Although no adults believe her, Candice continues to push and investigate on her own, and soon Decker realizes he must eliminate her, too. 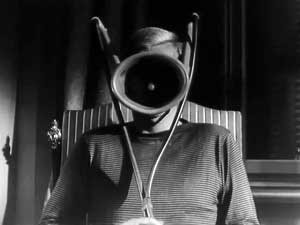 "The Snorkel" is a mystery in the vein of the "Columbo" television series, in the sense that the audience is shown how the murderer sets up his "perfect crime" and the subsequent enjoyment comes from watching his said perfection be picked apart and his crimes ultimately coming to light due to something he overlooked or an attempt to stop whoever it is who is investigating him from succeeding.

Like a "Columbo" episode, the murderer here is such a vile individual that viewers can't wait to see him exposed--there's every indication that this is his second murder as part of a long-term plan to gain access to his wife's fortune, and he is so base and arrogant that his wife isn't even buried before he starts putting the moves on Candice's hot young governess (Betta St. John)--but unlike on "Columbo" we're not given insight into the entire method by which Decker commits his crime, but the film lets viewers work it out at the same time Candice does.

The film's closing minutes represent a near-perfect ending. Candice turns key parts of Decker's scheme on him, with the help of a little bit of coincidence, and sets him up for a heaping helping of poetic justice... a great pay-off for the hour's time during which we've watched Decker ooze his way across the screen with an ever-growing wish for the ability to reach into the film and beat him to a pulp. 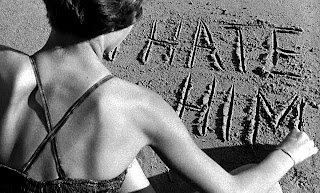 With a script that moves so fast that we can barely notice its populated by two-dimensional characters; great performances by Peter Van Eyck, as a slimy villain you'll love to hate, and Mandy Miller, in one of her 'wounded kitten'-type roles that she so excelled at; and director Guy Green who brings across Candice's pursuit for truth with such conviction that viewers will be with her all the way, but will also wonder if her fanaticism isn't evidence that she's not just a child but also more than just a little crazy, "The Snorkel" is an excellent film from a nearly forgotten chapter in the history of Hammer Studios... from a time when they were more known for their thrillers than their technicolor Gothic horror romps.

Check it out. It's one of six undeservedly obscure films presented in the "Icons of Suspense" DVD collection.

Posted by Steve Miller at 3:33 PM No comments: Links to this post

The Milla Jovovich Quarterly:
How Milla Spent Her Summer Vacation 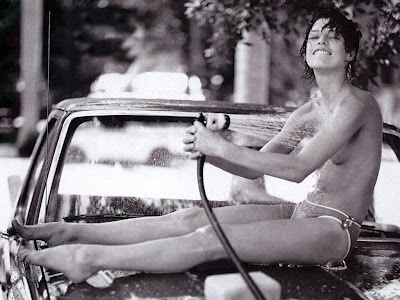 Posted by Steve Miller at 12:01 AM 2 comments: Links to this post

I recently got another question about the illo on the masthead of Shades of Gray. Who drew it and where is it from, was the basic question.

Well, the drawing is by Milton Caniff of "Terry and the Pirates" fame, and the lovely lady in question is Miss Lace. She appeared in a WWII-era strip, "Male Call", that Caniff created initially for the weekly newspapers published on Army bases and in camps, but it also appeared on the comics pages of civilian newspapers.

Don Markstein has written a brief history of the strip, which you can read by clicking here.

Meanwhile, here are a few of Caniff's strips to brighten your day. (I've got about a dozen of my favorites that I'll be posting over the next couple of weeks.)

By the way, the strip detailing the as-of-yet unnamed Miss Lace's arrival at the Army Base is a reference to the fact that the strip initially starred Burma, a ditzy blonde from Caniff's "Terry and the Pirates" strip. However, Caniff had not received permission from the syndicate that owned the "Terry" strip, so he had to replace her with a different character to keep "Male Call" going.

As always, click on the individual cartoons for larger, more easily read versions.

Posted by Steve Miller at 11:11 AM No comments: Links to this post