A giant octopus-like sea monster rises from the deepest canyons of the Pacific Ocean to attack experimental nuclear submarines and the San Francisco waterfront. 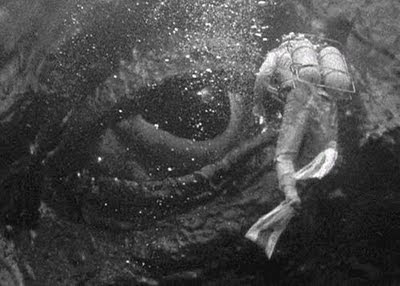 A bit slow-moving by modern standards, this is nonetheless a fine example of the "giant sea-monster runs amok due to the radiation from atomic bomb tests" that was kicked off by "The Beast from 20,000 Fathoms" and "Gorjira" (aka "Godzilla").

The main attraction of the film is, of course, the rampaging creation, which is "octopus-like" because it actually only has six arms. It's not bad as far as these movies go, particularly during the sequence where it's tearing down the Golden Gate Bridge. According to movie legend, the notoriously budget-conscious producer Sam Katzman only gave animator Ray Harryhausen enough time and money to build a six-armed creature. (I suspect there are many execs at present-day Warner Bros., Disney, Universal, and Sony Pictures [formerly Columbia] who would give their right arms for someone like Katzman or Mario Bava to come back from the dead and share their methods for making good looking movies on the cheap with the current crop of big spending producers and directors.)

As for the human cast, the acting and characters are typical for a 1955 sci-fi flick. The most interesting character in the film, especially considering its vintage, is Dr. Lesley Joyce, played by Faith Domergue. While early in the film she seems to be mooning over her male scientific colleague and rival early in the film, and ultimately shifts her affections to a submarine commander, unlike most women characters of this period finding a hubby and giving up her career in exchange for staying home and having kids and mixing his martinis at night. Domergue's character is strong-willed without being shrewish and career-oriented without being frigid--as her final lines of the film drive home when she puts off a romantic advance by Kenneth Tobey's naval officer by stating that they can continue when she's back from her long-time planned scientific expedition to the Nile river.

Although the budgetary constraints are occasionally evident--I really think Katzman and Gordon's vision for the Golden Gate bridge sequence mixing live action actors with animated monster mayhem outstripped the money and time at their disposal--this is still a film that's well worth the time of anyone who enjoys 1950s sci-fi flicks.