It's a Wonder Woman Wednesday!


Posted by Steve Miller at 5:54 PM No comments: Links to this post

Friends, co-workers, and brothers-in-slackerhood Frankie and Jeff (Darro and Moreland) become involved in a police investigation of a murder linked to a gambling ring. Will they help Frankie's police detective brother (Bond) solve the case, or will they end up the next victims of the gunmen? 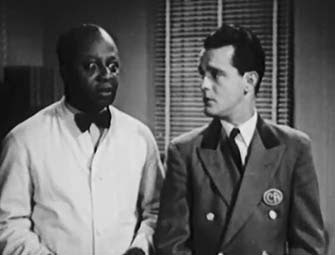 "You're Out of Luck" is a fun little mystery/comedy that is another showcase for the talents of Darro and Moreland. It's not quite as good as "Up in the Air," mostly because the way Frankie and Jeff become involved in the murder investigation, and remain involved, feels forced at every turn. The film is further weakened by the fact the paltry budget is made on shows multiple times on the screen through recycled and thinly disguised sets and cheaply done effects used in place of location shots. There's also the issue that the story feels a bit haphazardly put together and overcrowded with characters--most of whom serve no purpose in the story whatsoever. (Darro's character is given two possible love interests, neither of which do anything for the story nor his love life, and his cop brother's girlfriend likewise does nothing for the story. These characters are so pointless that I don't remember any of their names and I had a hard time telling two of them apart while the film unfolded.)

The film's weaknesses are almost made up for by Moreland having some of the best quips of any of the films he made together with Darro... and by Moreland once again being the smarter of the characters (even if no one ever listens to him). The film is completely carried by the charm of its two leads and the feeling that a true, warm friendship exists between them, and even that barely manages to drag it up to a low 5 rating.

If you're a big fan of Darro & Moreland, "You're Out of Luck" is worth checking out, but it may not be worth going too far out of your way for; look to see if you can find it in a DVD multipack. If you're not familiar with their work, "Up in the Air" is a far better place to start.

Posted by Steve Miller at 5:14 PM No comments: Links to this post