Abbott and Costello do the Dark Continent

After dimwitted but kindhearted bookseller Stanley Livingston (Costello) is mistaken by a scheming con-woman Diane Emerson (Brook) as an Africa expert, he is brought on an African safari that supposedly is hunting for a rare giant ape, but in actuality is searching for a secret tribe of cannibals deep within the African jungle who are rich in diamonds. With Stanley's greedy co-worker Buzz (Abbott) along for the ride, much confusion, double-crossing, and slapstick routines with lions, crocodiles, and giant apes (well, a guy in a monkey suit pretending to be a giant ape) ensue. 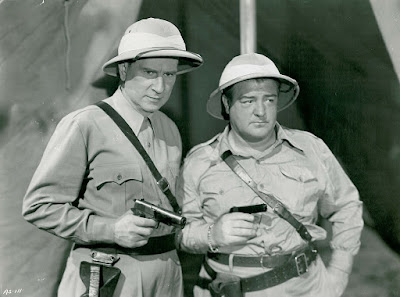 "Africa Screams" is a funny, fairly average Abbott & Costello vehicle. Abbotts routines with Shemp Howard (of Three Stooges fame, appearing here as perhaps the most effeminate manservant ever put on screen) are highlights of the film. It remains a solid effort up to the very end, where it erupts into a wild chase scene--with cannibals, crooks, and various kinds of apes and monkeys all chasing Stanley and each other around the set while Buzz tries to make his getaway with a bag of large diamonds--that comes to a sudden halt and leaves a number of plot-threads dangling. Now, I don't expect nice little story packages from an Abbott & Costello film, but the fate of a number of characters is left unresolved, and I would have liked to see a little more in the way of wrap-up.

"Africa Screams" is recommended for Abbott & Costello fans, so long as you go in knowing it's not their best effort. However, if you're one of those oversensitive types who take offense at racism whenever possible, you might want to leave this one alone. (I already mentioned the cannibals, so I think you can guess why I'm warning you.)