Dr. Cross (Price) faces the ultimate ethical conflict when he is charged with the care of the woman who can indetify him as a murderer (Shaw). Will his coldhearted mistress (Bari) spur him to committ another murder, or will he find his humanity again? 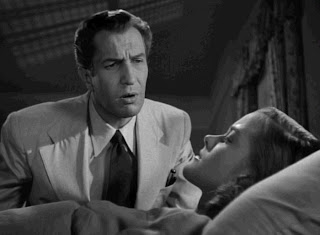 "Shock" is a thriller with an average, predictable storyline. The actors all give some pretty good performances (with Price, as the conflicted and ultimately spineless Cross, and Bari, as his evil mistress, being particularly strong), and the lighting and camera work is also decent. However, although the film only runs 70 minutes, there isn't enough story to fill it, and things start to drag very early on.

With a few more twists and turns, and perhaps a little more action than Cross and his floozy plotting nefarious deeds within earshot of a semi-concious Janet, "Shock" could have been a fun little suspense movie. Instead, all we have here is a B-movie where the B stands for "boring."