Check out 'The Invisible Woman'
(if you can see her)

A runway model (Bruce) volunteers to test an invisibility machine so she can get back at her abusive boss. Things get complicated when gangsters decide they want the machine for their own purposes. 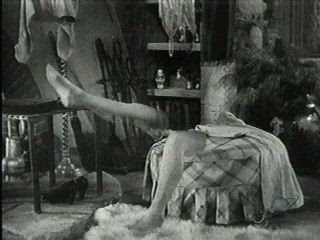 "The Invisible Woman" was touted as a sequel to Universal's 1933 sci-fi thriller "The Invisible Man"--the first sequel, in fact. However, it has nothing in common with that movie... other than the word "invisible" in the title.

This film is a light comedy with some screwball elements and slight romantic touches. Everything is played for laughs and the film is perhaps even funnier now because of some of the outdated social attitudes on display in the film. (At the time, the solution to dealing with the problem of having to pick up a passed out naked woman was the source of humor, but today it's the fact that both John Barrymore and John Howard's characters were too gentlemanly to touch her bare skin is the funny part.)