Beware the secretary too good to be true....

When a mysterious veiled woman frames private detective Johnny Strange (Douglas) for the murder of a much-loathed radio reporter, his equally mysterious secretary (Mara) is ready with just the right lie to clear him. But Lt. Webb of the homicide department (Frawley) isn't buying it, and Johnny has to race against time to find the real killer. 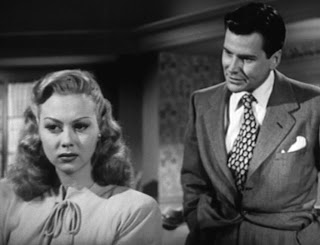 "The Inner Circle" is a light-weight, slightly goofy mystery film that's the cinematic equavelent of an apple--it's a quick, inoffensive snack. Average acting, simple script, and an okay mystery plot (that keeps it together to the end, but then falls apart), it's not a bad way to spend an hour, but it's not an experience you'll remember. The most interesting thing about it is William Frawley as a sort-of proto-Columbo whose main investigative technique seems to be to annoy suspects into confessing.