Here are a pair of films from Edward D. Wood Jr, one that is almost a landmark and the other one of his better efforts. Consider this post part of a much-needed "setting the record straight" as to what film is a sequel to what film. (And don't trust the opinion of anyone who tells you about the sequel to "Plan 9 From Outer Space.")

A mad scientist (Lugosi) captures those that venture too close to his dilapidated house and subjects them to experiments intended to create a new race of radioactive supermen. When he captures a nosey female tabloid reporter (King) can it be long before his simpleminded assistant (Johnson) falls in love with her and turns on him? 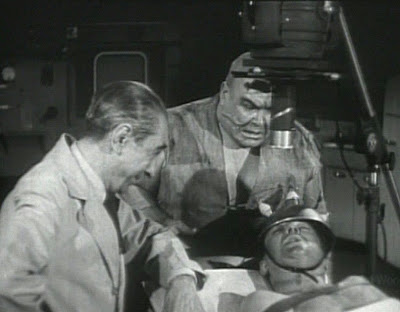 "Bride of the Monster" is one of those movies that's so bad it's fun to watch if you're in the right mood and with the right group of friends. It's perfect to include in the line-up for a Bad Movie Night, because it's full of strange characters that are badly acted, situations that are badly explained and sets that are badly made, but it moves fast and has just enough redeeming features that it will keep you entertaining and laughing. (What's more, the story actually makes some degree of sense, assuming you buy into the whole mad scientist creating atomic monsters thing.)

But this is also a sad movie. Sad because it features an old and broken-down Bela Lugosi so prominently. When watching this movie, I feel the same sort of sorrow I felt while watching Peter Cushing in "The Masks of Death", because in both cases the ravages of age and illness are so visible on both men. It's sad to see such great talent at the point where it is about to be taken from the world forever. Lugosi's presence in this film is made twice as tragic because it's such a shoddy piece of work and because of a clumsily executed homage to one of Lugosi's greatest films, "White Zombie". (There are extreme close-ups of Lugosi's eyes, he does the same weird hand gestures he did while playing the Zombie Master, and the female victim appears hypnotized in a flowing white gown. Unfortunately, Lugosi's eyes look as old and tired as he is, the hand gesture seems out of place, and the gown is nowhere as stylish as the one in "White Zombie".)

Although Lugosi fans will feel a twinge of sadness to see him in this movie, they can take heart in the fact that he is treated better by both the script and the director than he was in any other of the films he did in his last decade on Earth. They can also take heart in the fact that Lugosi gets to act in this film. Wood lets him show a greater range than any role Lugosi had played since "The Black Cat" and "Son of Frankenstein".

No matter how old and frail Lugosi appears in this film, no matter how cheap and pathetic the quality of the sets around him, there is no denying that he gives a powerful performance.

Reportedly, Ed Wood promised Lugosi that "Bride of the Monster" would return him to stardom, and he certainly did all he could to deliver on that promise. Lugosi's scenes with George Becwar--where we learn of his character's tragic past and the depths of his madness--is great stuff. It's perhaps the best scene that Wood ever filmed. In fact, every scene that features Lugosi in this movie probably ranks among the best Wood ever filmed, and the weakness of the rest of the cast only helps to accentuate that even as a broken old man, Lugosi was an actor with great ability.

The scenes and the strange police captain and his pet bird in "Bride of the Monster" are really all the evidence that one should need to put a lie to the claim that Wood is the worst director ever. It takes actually watching the film to realize this, though. That said, this would be a far better viewing experience if someone actually knew how to edit a film properly took a crack at reworking it.

(As a sad footnote, even if this film had been good enough to restart Lugosi's film career as Ed Wood believed, Lugosi passed away in August of 1956.)

A conman posing as a medium (Duncan) has set up shop in the old mansion where a mad scientist used to make his monsters. Lt Bradford (Moore) the police department's unofficial expert on the supernatural goes to investigate. The medium may be a fake, but who is that strange woman in black who kills teenagers who are make out in the nearby woods? And who is the woman in white who appears and disappears at will? Given that this is a film from the mind of Eddie Wood, will be ever find out?! 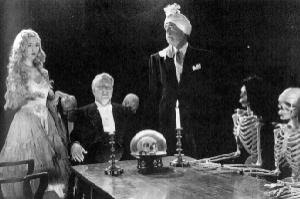 "Night of the Ghouls" has been described to me, by someone who's watched more Ed Wood films than any sane person should, as the best film he ever made. For most of the film's running time, I thought my friend had to be crazy to make such a claim, but the scenes grafted into the film from a early Wood horror short titled "Final Curtain" and the film's climactic minutes are actually pretty creepy. Yes... Ed Wood DOES manage to invoke a sense of dread instead of just making something dreadful. (And he even throws in a twist ending that no one will see coming.)

Wood also seemed to have made more of an attempt to maintain an internal continuity in this film than he has in any other of his film's I've seen. It's reflected in the fact that Lt. Bradford is on his way to enjoy a night at the opera when he is called to investigate the strange going-ons at the old house... so he goes on his assignment in evening dress, so his clothes match those he wore in the scenes taken from "Final Curtain" and placed here.

This being a film from Ed Wood, however, one can't expect attention to detail taken too far, now can we? Wood may have done a stellar job (by his standards) on maintaining this film's internal continuity, but he screwed up in almost every way when we look at the big picture it's part of.

"Night of the Ghouls" is the sequel to "Bride of the Monster", but the only details he gets right between the two films is that the comic relief character played by Paul Marco is named Patrolman Kelton, the hulking manbeast is named Lobo, and there was a mad scientist who once lived in a house and made monsters. He gets Bradford's name wrong (it was Lt. Craig), the location of the house wrong (it wasn't by Lake Willow but rather by Marsh Lake on Willow Road), and Lobo was very much dead at the end of "Bride". (That last one might not be a mistake, given some of the revelations that take place late in "Night", but I have a hard time giving Wood the benefit of the doubt.)

"Night of the Ghouls" is another sad little movie from Edward D. Wood, Jr. Unlike most of his output, this film actually does manage to achieve what he was going for in a couple of spots. Interestingly, some of those bits were scavenged from an earlier movie, one that Wood perhaps spent more time on than he did his other efforts. Plus, as mentioned, Wood actually tries to maintain continuity from scene to scene. On the very heavy downside, though, the film meanders and wanders through its storyline worse than "Plan 9 From Outer Space". Most people with better things to do than watch Ed Wood movies will probably not even GET to the good parts, because they'll have turned the movie off, because it doesn't seem to hold a focus for more than a minute at a time. The wandering nature of the screenplay drags the film down from a low 5 to a low 4.

Yes, this may well be Ed Wood's finest effort--I still think that honor probably goes to "Glen or Glenda?" but I understand my friend's point having sat through the film. I also consider this another bit of evidence that Wood WASN'T the world's worst director. That's not to say you'll miss anything if you spend your time watching something else!

(Speaking of watching something else.... Remember how I said that this is a sequel to "Bride of the Monster"? Some who like to pass themselves off as film critics or reviewers have stated it's a sequel to "Plan 9 from Outer Space". If you come across someone making that claim, you are witnessing an idiot in action. And he or she is a lazy idiot, because anyone who WATCHES "Night of Ghouls" who has also seen "Bride of the Monster" will easily pick up on the connection. There are NO links to "Plan 9" in this film, as far as the story goes.)