'Murder on the Bridle Path' disappoints

When the murder of a young woman (Terry) is disguised to look like a riding accident, Police Inspector Oscar Piper (Gleason) once again receives assistance from his friend and amateur detective Hildegarde Withers (Broderick) in sorting truth from lies and shady characters from murderers. 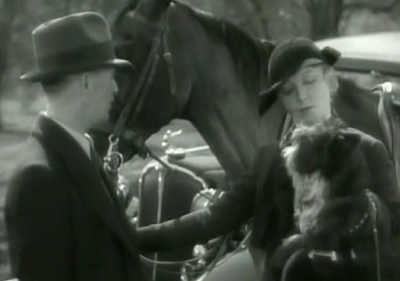 "Murder on the Bridle Path" is the fourth film in the Hildegarde Withers series and the first one to feature an actress other than Edna May Oliver in the role of sleuthing school marm Ms. Withers. It's also the weakest entry so far.

While the replacement of the self-described "horse-faced" Oliver with the "moon-faced" and younger Helen Broderick is an immediately noticeable change, it's not actually the problem that does the movie in; Broderick actually does a good job as the acerbic school teacher. No, what damages this movie beyond saving is its script.

The Hildegarde Withers movies are detective movies, but they are also comedies. While the detective side of things is passable, the attempts at comedy are absolute and total disasters. I don't think I have seen a movie where almost every single laugh line is a complete dud--and the only remotely funny one is responded to  by a character with "are you trying to be funny?" (To which I actually said to the screen, "Yes! And he's the only one who's succeeded so far!")

Another drawback is that Oscar Piper is portrayed as an absolute moron in this film. It's like the character, who was previously shown to be a good and intelligent police officer that sometimes goes for the first obvious suspect due to pressure from his superiors, was replaced with the stock stupid cop character that so often infests B-movie murder mysteries. This is even worse than the unfunny quips, because even if you can't write comedy to save your life, you can at least get established characters right when working on a series.

On the positive side, Helen Broderick is actually a nice replace for Oliver, since she has Hildegarde Withers' crisp and caustic attitude down pat. Broderick was also an accomplished comedic actress, so this SHOULD also have been a positive. Unfortunately, the material she has to work with in this film is so unfunny that you can't tell. Perhaps her comedic gifts saved this film from being even more miserable than it is... but I think it's more likely that it proves that even a good actor can't save bad material (no matter what the saying says).