'The Great Flamarion' is a tale of lust and tragedy

Reclusive marksman and vaudeville entertainer (von Stroheim) comes out of his shell when he believes the beautiful assistant in his act (Hughes) loves him and wants to be with him instead of her husband (Duryea). However, the coldhearted, manipulative woman simply wants the Great Flamarion to "accidentally" shoot her husband during the act, so she can run off with yet another man. 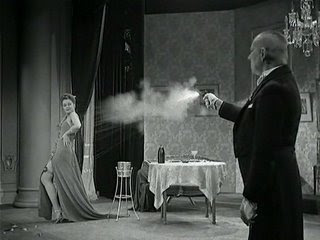 "The Great Flamarion" is an utterly predictable film, although it might not have been so in 1946 when it was made. The story never misses a chance to go exactly where you'd expect it to go, and the characters never move beyond complete and total cliches.

However, there is still a degree of enjoyment to be derived from this film if you just sit back and go with it. Hughes' performance as the black widow who should make black widows feel uneasy is so over-the-top that it fits perfectly with the nature of the script, while Von Stroheim takes an interesting term as a man who moves from an obsession with lethal guns to a lethal obsession with the woman who took his self-respect and his honor.