A killer (Swanstrom) is stalking through the shadows of a Victorian-era city, butchering prostitutes and leaving a... um... most unusual signature at each brutal slayings. 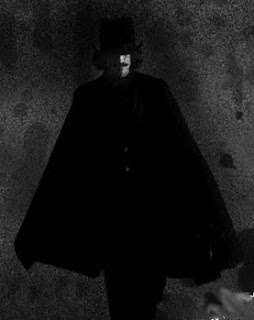 The film's title gives away part of this strange little short's punchline, but you still won't be prepared for what actually happens, and you'll be laughing despite yourself... laughing until you almost puke. But you won't puke like Jack... no one pukes like Jack!

The filmmakers shot "Jack the Vomiter" as if it was a silent movie, and they used various methods to make the film appear as if it was a ill-used silent movie, with missing frames, badly done splices, scratches, and burn- and mildew-damage. When I originally posted this review to Rotten Tomatoes, I commented that I thought they filmmakers had gone a bit far with the "aging" of the film, that the damage appeared so severe that I doubted it could even run through a projector if it had been real. At the time, I assumed the damage was computer generated.

However, Mike Corrigan contacted me with the following technical information about the film: "The 'missing frames, badly done splices, scratches, and burn- and mildew-damage" were actually the result of hand-processing the 16mm sections in a bucket without any regard for correct procedure. Hence, the film came out stuck together and half processed in spots. Then we dried it in my back yard where it picked up even more crud. We actually DID run it through a projector (amazingly) and parts of it were transferred at home. Just thought you'd be interested in our 'process.'"

"Jack the Vomiter" is a very interesting bit of film, although the inconsistent narrative tone is a weakness that bothers me. In some scenes, the filmakers do a good job of capturing the feel of a real silent movie (even if the subject matter would never have appeared in one), yet in others not even a halfhearted attempt is made. However, the effective use of an occasional sound and the strategically placed, deadpan-humours title cards go along way to make up for the inconsistent cinematic styles. And the projectile vomiting. I've never laughed so hard at vomiting in my life! It's a scene that must be seen to be believed!

As far as the vomiting goes, Corrigan added this: "The Vomit Canon? Well, that's a trade secret!"

I must admit that I don't understand the point of this film (unless it was to create the most impressive vomit scene ever displayed on screen), but it entertained me and that's ultimately what matters most when it comes to movies.

Click here to visit the official HeadJuice Production website. You can even purchase your very own DVD copy of "Jack the Vomiter" while there.