'Love From a Stranger' is a gripping thriller

Carol (Harding) wins the lottery and marries the perfect man (Rathbone) all within the space of a few months. The honeymoon's barely over, however, before she realizes he is not be what he seems. Carol soon finds herself in a contest of will and wits where her very life may be at stake. 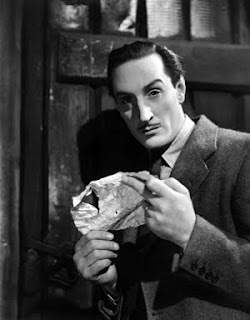 "Love From a Stranger" is a remarkable thriller based on a story by Agatha Christie. It's a bit too slow in the build-up, but once it gets going, it's tense, exciting, and lots of fun. It's definitely a movie you want to stay with, because you'll be greatly rewarded for your patience. The final scenes of this movie are perhaps the best featured in any Christie adaptation, but it's only the greatest of many fantastic moments in the film.

Part of what makes this film great is the fact that it dates from a time when filmmakers had mastered the use of light and shadow in the black-and-white media to heighten suspense and tension. This may not be a "film noir" movie, but several of the scenes are lit and filmed with such style that film noir masters hopefully studied them. (The final scene is a particularly excellent example of this.)

The film's success is really due to the spectacular performances of Ann Harding and Basil Rathbone. It's the sort of a caliber that we don't see nearly enough of in modern films.

Particularly remarkable are the moments where Harding realizes she is married to a lunatic, and later, where it dawns her her that her very life depends on the next thing that comes out of her mouth. It both these scenes, Harding conveys more with her facial expressions than pages of dialogue would be able to do.

Similarly, Rathbone displays an amazing range in his performance here. He starts out as the ultimately gentleman, moves slowly into arrogance, barely concealed menace, and ultimately into fullblown insanity. The extended, crazy rant he delivers during this film is so over-the-top and so intense that even Jack Nicholson can only reach such heights in his dreams. (If you've only seen Rathbone as Sherlock Holmes, you've only seen a tiny fraction of what he is capable of on screen.)

"Love From a Stranger" is one of those films that has slipped through the cracks of cinema and into undeserved obscurity. If you like psychological thrillers, or if you're a fan of Basil Rathbone or Ann Harding, you need to see this movie.

(And here's a bit of trivia for Christie Completists: Joan Hickson, who at the end of her career would play spinster detective Miss Marple on British and American TV during the 1980s and 1990s, has a small role in this film at the beginning of her career, appearing as Emmy.)