A man (Lloyd) goes to great lengths to return a letter dropped by a beautiful actress (Daniels). His attempt at gallantry throws an entire movie studio into chaos. 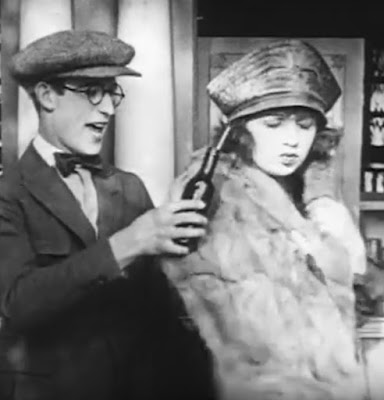 There are few films where "action-packed" is a more apt discriptor than it is for "Hey There". From the first fade-in to the final image of Harold Lloyd's character in the street, there is not a second wasted. Even better, as tightly packed as the script is with non-stop gags, its so well crafted that it provides some very nice character-defining moments that greatly enhance the film and give Bebe Daniels, William Blaisdell, and Lloyd to engage in acting that goes beyond merely clowning around. The writer of the film is unknown, or I'd be praising him by name.

This is another one of those films where Lloyd plays a guy on the make, but he comes off as more likable than in some of the others, partly because he's trying to do a nice thing (even if his motivations aren't entirely pure), and he's not intentionally trying to be an ass.

While the storytelling and performances by the actors are excellent, the film is made even more worthwhile by the way it takes a couple of silent movie tropes and demolishes them. One of my favorite bits in the film revolves around the nearly obligatory scene where a character in a rediculously bad disgusie tries to bluff one of the other characters.

I think even if you don't usually like silent movies, you might enjoy this one, due to the non-stop comedy and solid acting by the performers. That is doubly-true if you enjoy "behind the scenes"-type fictionalizations of the movie business and the personalities who work in it. (If you're a lover of hashtag activism, the film might also hold appeal, because it shows that directors have been sexually harassing actresses since the dawn of filmmaking.

I've made it easy for you to watch "Hey There" by embedding it below, via YouTube. The last bit of the movie is in bad shape, and I think a small or two piece may be missing toward the end as well, but it won't detract much from your enjoyment..