When Jack (Collier) is ordered by his father to give up his idle life of partying and womanizing, he drives cross-country with his cousin Ossie (Brown), from New York to California. Along the way, the two make an enemy (Lugosi), and find a pair of new girl friends (Munson and White). But then the life they knew in New York catches up with them in the form of an actress who is friends with Ozzie (Todd), and Jack's ex-fiancee, who was partly responsible for his exile (Livingston). 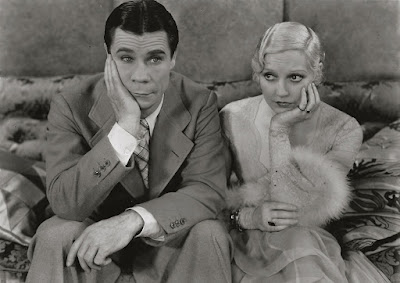 "Broad Minded" is an uneven comedy that features a talented cast who are doing their best with a sloppily written script. It's possible that some jokes made sense to audiences in 1931 have lost all context and meaning nearly 90 years later, but even allowing for that, more jokes fall flat in this film than not.

This is the first time I've come across Joe E. Brown in a film, although I have been vaguely aware of the name; he's one of those once-famous film stars that has since become all-but-forgotten. Although William Collier Jr. is arguably the main character of the story, this is very much Brown's picture, with much screentime devoted to him doing physical bits, being generally goofy, and showing off his unnaturally large mouth. Because of so much of the film's comedy revolves around Brown, his character is also the main victim of the sloppiness of the script. On the one hand, we a supposed to believe that Ossie has a wholesome image and is viewed by Jack's father and others as responsible and mature enough to be a role-model for the hardpartying Jack to follow onto the straight-and narrow. On the other hand, Ossie is a college dropout who parties even harder than Jack, is a bigger womanizer than Jack, and doesn't make any effort to hide what he is. The writers also couldn't seem to make up their minds whether Ossie is dumb as a post, or an intelligent guy who just doesn't care about anything but making life fun for himself and those around him. He's written as both ways as the film unfolds. Beyond this, I can't really judge Brown's performance, because I have nothing else to measure it against. 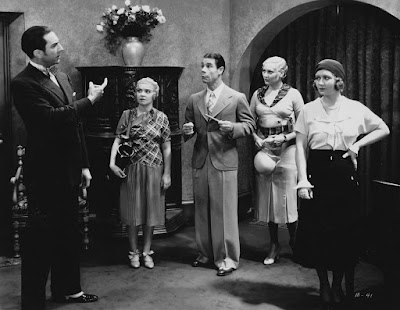 The rest of the film's characters recieve very little development, and they are pretty much the stock figures you'd expect to find in a comedy from this period. Ona Munson and Marjorie White are nothing more than pretty love interests for the two main characters (and they don't do much aside from looking pretty and to be there for Brown to bounce jokes off); Grayce Hampton is the old, bitter aunt standing in the way of the young couples having fun; and so on. Only William Collier Jr. breaks the mold a bit, as Jack is more interesting and charismatic than many romantic leads from movies of this type. I think it's more Collier's credit as an actor than it is to the writers; he gave his character more life than it probably deserved.


Meanwhile, Thelma Todd, who appears late in the film in a pivotal role, isn't as good here as she was in other films she made around the same time. She holds the screen like she always does, but she seems stiffer and less lively than I think I've ever seen her--and that includes films where her only function was to stand around and be pretty (the sort of roles performed here by Munson and White). Perhaps Todd was one of those performers who needed the right partner to play off (as seen in her excellent films co-starring with Charley Chase)

Among the cast laboring in this substandard movie, however, it is Bela Lugosi shines the brightest and puts forth the most effort. "Broad Minded" is among the best performances I've seen from Bela Lugosi--and may be the best. He, as the closest thing it has to a villain, gets to be menacing, funny, and even just plain emotional when he thinks his beloved Gerdie is cheating on him with Collier, Brown, or perhaps even both. Lugosi shows here that he had a much greater range than he was allowed to show in almost any other picture he appeared in. "Dracula" may have been his break-through role, but it also put him in a box that I think did his career a great deal of harm, and ultimately robbed audiences of what could have been many great performances.

In the final analysis, "Broad Minded" has enough entertaining bits--the opening debauched "baby party" held by Jacks soon-to-be ex-fiance and every scene featuring Bela Lugosi--to make it enjoyable, but it's not a movie that needs to be high on your list of priorities.


On a personal note that has very little to do with "Broad Minded", I found a bit of the "road-trip" portion of the film fascinating. When I was a kid in the 1980s, we traveled throughout the United States. One of the trips, I remember a couple kitchy Indian rest-stops/cafes like the one Jack and Ossie stop at in this movie. Part of me is now tempted to take a drive through Nevada and Arizona to see if any such places still exist, or if America has changed more in the past 30 years than it did in the 50 years between the release of "Broad Minded" and my childhood.
Posted by Steve Miller at 5:37 PM