'The Boat' is another must-see silent flick

A husband (Keaton) builds a boat in his garage and takes his family sailing. Everything that can go wrong, does go wrong. 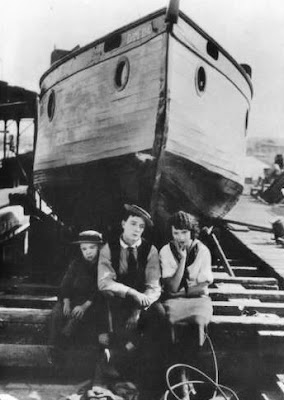 I read somewhere that "The Boat" was, in Buster Keaton's mind, viewed as a sequel to "One Week", a film about the doomed effort by newly-weds to a home from a kit. At one point, Keaton even suggested that the two films be combined to form a single longer feature, although that never happened.

"The Boat" is another masterful mix of aburdist humor, slapstick and set construction, none of which I want to go into detail about because it will spoil the surprises and the laughs. There is also some impressive miniature effects when the boat is caught in a storm and capsizes again and again and again (which is where some of the impressive sets and stunt work also come into play).

The final five or so minutes of the film get a little too intense for me, and I found laughing despite myself--especially at the joke around the boat's name, Damfino--but that intensity gave the film's conclusion (and the SECOND joke based off the boat's name) that much more impact.

This is another film that makes it clear why Buster Keaton is considered one of the masters of early filmmaking. I think it would be entertaining to anyone who enjoys absurdist humor, especially if it is darkly tinged. That's even if you usually say you don't like silent movies. I've made it easy for visitors to watch this great little movie, as I've embedded it below, via YouTube.