Will Their Marriage Survive 'One Week'?

Newly-weds (Keaton and Seely) build their dream house from a kit they've been given as a wedding present. Thanks to their lack of handiness and sabotage from her ex-boyfriend, things go less than smoothly. Will love conquer all, or will their marriage be over by the end of the week? 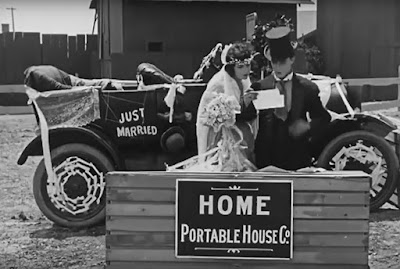 "One Week" was the first film Buster Keaton made after his partnership with 'Fatty' Arbuckle ended. When compared to the works that would follow--with their wild chase scenes and elaborate stunts--this is a fairly sedate movie. But it's some 25 minutes of solid hilarity, plus more than a few pratfalls and even some stunts.

In some ways, "One Week" is a collection of brief comedic sketches. The film is divided into sections, each covering a day in the week of the title, each featuring a little bit of plot, a gag or two, maybe a stunt, and all tied together by the couple working together to build their future home together. As the days unfold, the problems with their construction project escalate, in no small part due to interference from the bride's ex. One of the seven days is a Friday the Thirteenth, so on that day, things get really crazy for the newlyweds and their new home.

Humorous highlights of the film include a fun little bit where Keaton and Sybil trade places on the ground and first floor of the house in an instant; Keaton trying to get the chimney onto the roof; a piano delivery gone awry; a storm that has a most unusual effect on the house; the film's climax on the final day of week, which I can't even comment on without spoiling it; and one of the funniest bits of fourth-wall humor I've ever come across. There's also the scene where Sibyl takes a bath, which I partially covered in this post.

Perhaps even more important than the comedy bits are the way that Keaton and his co-creator Eddie Cline deftly fit enough character development of the newly-weds into the scenes that viewers see how much they love each other and subsequently become invested in the success of their do-it-yourself home construction project. For me, their first fight as husband and wife was one of the film's most dramatic moments and it made me smile broadly to see it resolved.

"One Week" is a movie I feel is well-worth your time and attention. I've made it easy to watch it by embedding it for you to watch right here. Just click, sit back, and be ready to laugh.