'Looser Than Loose' has a timeless quality, plus Charley Chase and Thelma Todd at their best

Charley's quiet evening with his fiancé (Todd) is interrupted when his boss calls and orders him to round up a couple of escorts and entertain the firm's biggest client (Henderson) with a night of drinking and dancing. Charley (Chase) lies about the nature of the entertainment he's supposed to line up, and his fiancé insists on joining him as his date. Things go from awkward to awful when the client likes Charley's fiancé better than the escort (Granger) and insists they swap dates. 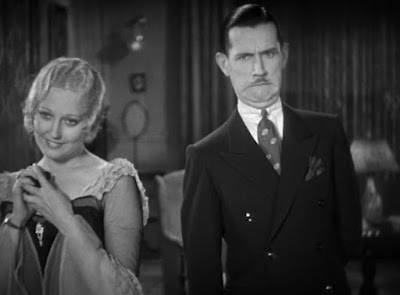 "Looser Than Loose" is another film that shows how wonderful Charley Chase and Thelma Todd were together on-screen. As I've stated in previous reviews, they seem to bring out the best performances in each other, and where they each occasionally overwhelm other actors they share scenes with, they don't do so to each other. I haven't seen all of the Chase/Todd pairings, but so far, this is the best one. They play off each other brilliantly in their first scene together--Todd in particular seems to be in fine form, with her

The way Chase and Todd balance each other out on screen is shown prominently in "Looser Than Loose". Here, we see Chase and Todd interacting extensively with each other, and then with other performers--Chase with Dorothy Granger, and Todd with Dell Henderson. Henderson is mostly passive in the scenes he shares with Todd, so it's hard to gauge how well they might play off each other, but Granger is absolutely overwhelmed in her scenes with Chase. She's emoting and gesturing and generally being very active, but she doesn't have the sort of magnetic screen presence that Chase has, so he ends up crowding her out by just being his usual on-screen self. This never happens when he is performing with Todd.

As for the story and comedy action of the film, it's a fast-paced affair that sees Chase yet again poking fun at middle class societal standards and hypocrisies of the "Jazz Age"--standards which don't seem to have shifted all that much when it comes right down to it. The script for "Looser Than Loose" could be reshot with a modern spin with very few changes. (The stunt-laden, car-crash filled, chaotic scene of prohibition-era booze-lovers fleeing what they think is a police raid would need a different motivation, but other than that I don't think any other changes would be needed.)

In fact, it is this timeless quality to many of Charley Chase's comedies that has me increasingly viewing him as one of the most underrated comedians and story-tellers of the early talkies era. (Chase may not have written the dialogue for his films, nor been the official director, but he was, by all accounts, very much in control of the subject matter and the general thrust of the scenes and gags in his films.

"Looser Than Loose" is one of 17 Charley Chase-starring short films in included in the Charley Chase at Hal Roach: The Talkies 1930-1931, and he shares the screen with Thelma Todd in most of them.