'Cockeyed Cavaliers' has hits and misses

A pair of wandering rogues (Woolsey and Wheeler) pass themselves off as physicians from the King's Court and insinuate themselves into the household of the local lord (Greig). In between hitting on his sister (Todd) and trying to help a young woman who has disguised herself as a boy (Lee) in order to avoid a forced marriage to the lord, they are constantly struggling to avoid giving themselves away by being too stupid. 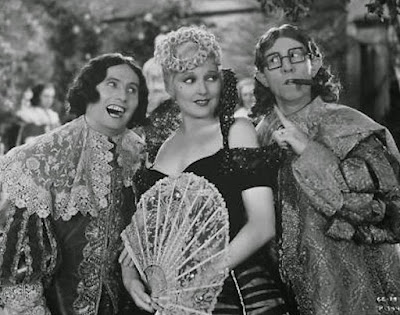 "Cockeyed Cavaliers" is a movie of highs and lows. When it is funny, it is very funny. When the jokes fail to land, they crash and leave big craters.

I can't decide if it's the style of the performances in the film, or the material that gets in the way when the movie starts sliding in the direction of crappy, so it may be a combination of both. And there's one area where the costume designers and make-up artists didn't go quite far enough to make an aspect of the film convincing.

First, let's start with the script, the songs, and the jokes.

Story-wise, the script is solid, nicely paced, and consisting of several intertwining plots that provide our heroes with plenty of challenges to overcome--including their own stupidity. The romantic subplot between Bert Wheeler and Dorothy Lee's characters--which starts when everyone believes Lee to be a boy--is interesting and ultimately leads straight into the film's conclusion and resolution of all the various problems; and the danger posed by Robert Woolsey's inability to not be randy around the wife of the very jealous and very violent baron (Thelma Todd and Noah Beery respectively) give rise to an equal amount of comedy and tension. The pieces are all very well arranged to maximize both the comedic and dramatic value of the plot elements and the characters in them.

Unfortunately, two out of the film's three major musical numbers aren't all that great. In fact, the song that opens the movie--performed by gossiping villagers and setting up a few major plot points--was so lame that if I wasn't watching this movie as part of the "Year of the Hot Toddy" project, I might have found something else to do with my time. The second song ("The Big Bad Wolf is Dead"), performed by our heroes, the films kinda-sorta villain, and the staff and guests at an inn, is better, but it goes on for entirely too long and the parts that are supposed to be funny mostly fail to launch or fail and crash. The third and final song ("Dilly Dally")--a combination song and dance number performed by Wheeler & Lee and Woolsey & Todd, in pars and together as a group--is, however, extremely entertaining on every level. It's well worth the wait. In some ways, this song even reflects the trajectory of the movie; it starts shaky, but firms up at about the halfway point, and really delivers during the third act. (This is of course better than the opposite.)

Despite the film getting better as it goes, the comedy remains uneven. It is not until we reach the climax--with a high society party, a wild boar hunt, and an even wilder chase scene--that every joke and physical comedy bit comes off well. Up to that point, some of the comedy routines fall flat because the jokes are weak and delivery feels like Wheeler and Woolsey (or whoever their "straight man" is) are performing a routine on stage. While other similar comedians--like the Marx Brothers and, later, Abbott & Costello, were literally taking routines perfected on stage and porting them into films, when watching them, I rarely have the feeling that a waiter is about to lean in and ask for my drink order the way I felt with nearly ever bit in this film. In fact, the scenes that worked the best were the ones where the comedy arose from the situation as much as it did from the back and forth between characters. For example, every scene Woolsey shares with Todd varies from chuckle-worthy to laugh-out-loud funny, especially when the action is revolving around Todd's cleavage. 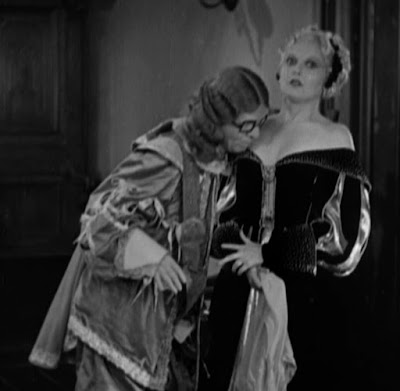 In fact, I think the only thing that ruined this film for me more than the nightclub-style delivery of many of the jokes was the fact that I simple could not buy Dorothy Lee as a boy. Sure, she was in man's clothing, but the characters would have to be both blind and stupid to not recognize that she was female. This is a shame, because there are some funny jokes tied to the cross-dressing element which would have been even funnier if more of an effort had gone into making it work. I mean, would it really have been that hard to give Lee a hairstyle more in keeping with what her character was pretending to me? Or perhaps putting her in a shirt and vest that were even looser and a little longer?

There are so many things I like about this film that I wish I could have liked the end result more. Aside from the stand-up feel of some of the delivery, every actor in the film is great in their parts. It's easy to see why Dorothy Lee played opposite Wheeler & Woolsey in just about every movie they made, because they make an excellent trio. And, although she had more than come into her own as a comedienne by the time she made this movie, Thelma Todd is mostly used here as the "straight man" for everyone else to play off... and she does that just as well here as she did when she filled that role in her earliest films with Charley Chase. Meanwhile, Noah Beery and Robert Greig are equal parts funny and melodramatically villainous as the film's corpulent bad guys. The production values in this period film are also top-notch, as are the special effects and stunts during the film's climax. And I adored every second of the aforementioned "Dilly Dally" routine. Still, I can't bring myself to give this film more than a high Six Rating.