'The Dark Hour' isn't worth your time

A young police detective (Walker) and his retired mentor (Churchill) join forces to solve a murder where each of their romantic interests (Ware and Hopper) are among the suspects. 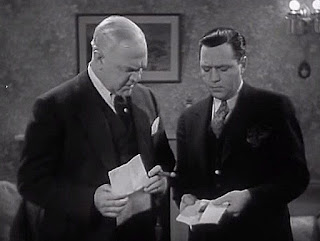 "The Dark Hour" has at its foundation an interesting murder mystery story and it has some nicely executed twists, but the bad ultimately outweighs the good here.

First of all, from a technical standpoint, the film is shockingly stagey, with characters crossing rooms to go in and out of doors, moving up- or down-stage, while appearing to carefully not step on each other's lines or get between the speaking and the audience. While watching, it felt like I could see the "exit stage left" and "cross to stage right" directions in the script, so it was very surprising to learn that the film was based on a novel not a stage play when I took another look at the credits. I usually don't mind a theatrical vibe from these old movies, but this one took it to a level where it became distracting.

The biggest strike against the film is the ending, because it turns what had been a charming lead character into an obnoxious bigot who is willing to look the other way when he thinks the murderer is someone he's friendly with, but is willing to literally chase the murderer around the world when it is revealed that it's a foreigner. I don't know how audiences reacted to that ending back in 1934, but I think most modern viewers will have a very negative reaction to it.