'The Flirt' will give you a few chuckles

A man on the make (Lloyd) takes a job as a waiter so he can flirt with a pretty cashier (Daniels). 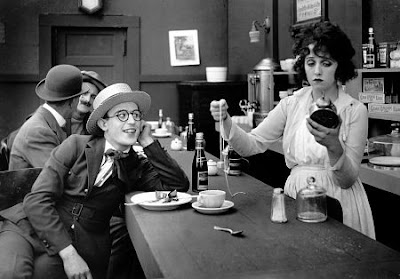 As I sample Harold Lloyd's short films, I am finding myself more annoyed than amused by them. So far, I haven't bothered writing up any that annoyed me, because the comments would basically be the same: "I barely made it through this film, because Lloyd's character was such an unpleasant jerk I had no reason stick with it."

"The Flirt" was, fortunately, not one those. Its a brief film (7 minutes long) that sees Lloyd play the sort of unpleasant character that was his stock and trade in his early pictures--a self-centered jerk who goes looking for trouble and causes chaos everywhere he goes through indifference to others and laziness. I found that character tolerable in this one, in part because he is set up from the beginning as a total heel, but also because his obnoxious behavior is very, very funny in this one.

The film opens with Harold in the park looking for a beautiful girl to hit on. He spots Bebe Daniels, follows her to work, and proceeds to wreak havoc in a retraunts dining room and kitchen as he tries to create a window of opportunity to flirt with her. The five minutes of the film where Harold "works" in the restaurant are a series of rapid-fire series of sight-gags and prat-falls that culminate in a patron becoming so frustrated that he goes on a shooting spree in an attempt to give Harold the sort of tip he so richly deserves. In addition to Lloyd's antics, there's a burly uncredited actor who plays the eatery's chef who also gets to be quite funny--and who at one point also nearly gives Harold what he deserves. This film also sits better with me than other Lloyd films I've seen, because of the ending. It's about as perfect and amusing as I could have wished for.

I've embedded "The Flirt" below, and I encourage you take a few minutes to watch it. If you like absurd physical comedy, I think you'll enjoy this one, even if the lead character is a bit unpleasant.