Abbott & Costello are great in an otherwise mediocre movie

A series of mistakes and bad assumptions lead to a female cab driver (Hutton) and her incompetent plumber friends (Abbott and Costello) to be drawn into the social machinations of high society, as well as an art heist. 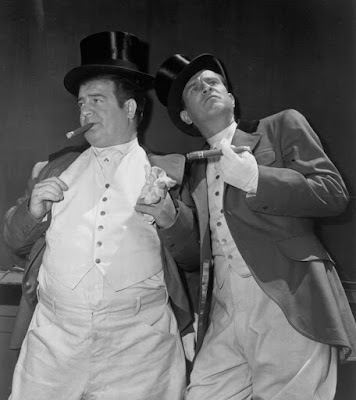 "In Society" is one of the weaker Abbott & Costello films. It's main problem is an unevenness of tone and energy. When it's Abbott & Costello are being mischievous and/or destroying property, the film is lively and full of energy. When the rest of the cast are off in other scenes setting up the plot or moving it forward, things are stilted, overly stagy, and borderline dull. It doesn't help matters that the obligatory songs in the film are performed by Marion Hutton--a pretty lady but a so-so singer and an awful actress. Her film career consisted of just four entires, and this was her only starring role... and judging from her performances in this film, it's no surprise why what is.

Another aspect of "In Society" that bothered me is that Abbott & Costello's standard characters have been ramped up to the point where Abbott is so vicious toward Costello that I had a very strong dislike for him, a dislike that was intensified by the fact that Costello was so dim and childlike in the way he played that he came across as simpleminded or even retarded, which made Abbott's behavior seem even more reprehensible. I had a similar reaction to Abbott's character in "Hold That Ghost", but it was more intense here.

For all I didn't like about the film, I loved the four major comedic set-pieces that A&C have in the film--and they got a full star in my rating by themselves--the bit where Costello sets up work for their plumbing company; the bit where he argues with a police officer about honking a car-horn at night; the bit where they destroy the bathroom in a mansion; Costello trying to get directions from people on a city street; the pair disrupting a gathering of snooty rich people; and the climactic scene where they are chasing thieves on a fire truck are them at the top of their game (even if I think that chase scene relies a bit too much on stock footage).

"In Society" is nowhere near the best Abbott & Costello film, so you can save it until you've watched the others included in eight-movie collection The Best of Abbott and Costello Volume 2.