Is there truth behind the 'Strange Illusion'?

A college student (Lydon) is suspicious of the man (Warren) his widowed mother (Eilers) is about to marry. Evidence mounts that the boyfriend may actually be a shadowy serial killer who has been eluding police for years... but is the "evidence" merely coincidences that are being exagerrated in the young man's jealous mind, or is his mother truly in danger? 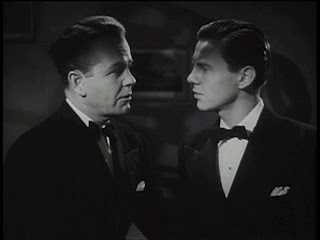 "Strange Illusion" is a thriller with sinister villians, and an interesting plot that's part Shakespeare and part Hitchcock. It's also got an unsual hero for a crime drama--young college kids weren't typically the protagonists in these sorts of films from the 1930s and 1940s--although that's another similarity to both Shakespeare and Hitchcock's films that this one exhibits. The dialogue is well-done, and the performances by the actors are all decent enough.

Despite all those positive points, this film is far from perfect. It could have benefitted immensely from another script rewrite or two before filming wrapped.

Our hero's suspicion of his mother's new love arises from a recurring dream he has. In fact, most of the increasingly damning clues he finds also originate with the recurring dream. I don't have the feeling the film is implying the young man is psychic, but that instead the clues are somehow being delivered to him by his subconcious mind. However, the dream reveals things to him that he couldn't possibly have known, subconscious or otherwise, and this overuse of the plot device drags the movie down to the point where it almost slips to the lower end of average. Then there's a few bits of sloppy filmmaking--such as when the vantage point upon a scene viewed through binoculars changes dramatically between two uses to look at the same spot from the same location--that don't exactly help to enhance the film's quality.

Nonetheless, this is an unusual entry in the thriller/film-noir genre, and it's worth a look. It's not as good as Ulmer's Lugosi/Karloff vehicle "The Black Cat," but it's still damn good.

(I also think that William Warren plays one of the slimiest characters I've yet to see in a movie. Whether or not he's the serial killer Our Hero believes him to be--and I won't say that he is, because I try not to spoil movies in this space--he is definately a Bad Guy who no-one would want to see their mother marry!)