'The Mistress of Atlantis' is a stylish early fantasy film

French Legionaires on a mapping and intelligence gathering expediton in the sandy wastes of Africa's Sahara desert find themselves trapped in the last vestiages of the ancient Atlantean civilization and at the mercy of the mysterious Antenia (Helm) and the strange people who inhabit the hidden village and underground kingdom she rules. 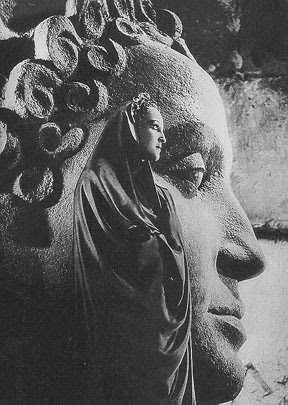 "The Mistress of Atlantis" is a fascinating, suspenseful fantasy film from the eariest days of talking picutres. It's the sort of film that usually annoys me--it's a film with far more style than substance, and when it's over, you will be reflecting on the coolnest of the camera-work, the quirky characters, and the great settings, costumes, and sets... but you'll may be finding yourself wishing there had been a little more to the story.

However, in the case of this movie, the acting is so impressive, the setting so exotic, and the presentation of events and characters so sucessfully dreamlike that I think any lover of the strange and creepy movies will enjoy it. (The one major mistake the filmmakers make is set the movie up so it's being told in flashback... that undercuts some of the suspense.)