A monkey is made of Lugosi in 'The Ape Man'

Dr. Brewster (Lugosi) decides to prove his evolutionary theory of by using a serum to turn himself into a "missing link." He soon regrets his state and goes about developing a cure. Unfortunately, his cure requires lots of fresh spinal fluid, so he takes to prowling the streets with his pet gorilla looking for people to kill. 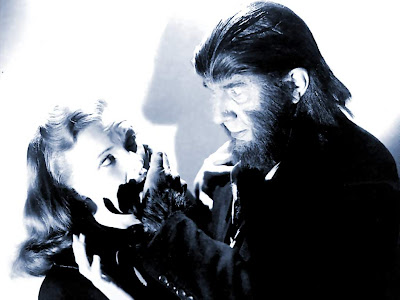 "The Ape Man" is an embarrassing affair all around. From the guy in the cheap gorilla suit; to Lugosi's "ape man" costume; to the lame reporter trio of comic relief characters; to the tepid climax of the unfocused, messy script, just about everything here should stand as an embarrassment to all those involved in created it. I'm sure everyone could hold their heads high while cashing their paychecks, but I hope they slinked by any theater screening this disaster back in the day. It must have been clear during filming what an awful film this would be; whether viewed as a horror film, or a horror film spoof (and I think they were trying to make the latter) this is a movie that just doesn't work.

In fairness, the actors, by the way, do a passable job, given what they're working with... but even if they'd given Oscar-worthy performances, "The Ape Man" would still be a steaming pile of primate droppings.

Running just under 70 minutes, "The Ape Man" is okay for the first 10-15 of them, but then it takes a sharp nose-dive into The Suck. It remains watchable, but only if you're interested in seeing if it can get any worse (and in seeing an actor in a terribly gorilla suit make a monkey out of himself).