Bi-planes buzz through dawn of talkies in
'Hell's Angels'

When WWI breaks out, two very different brothers (Lyon and Hall) join the infant RAF... and become two of the first War in the Heavens' many unsung heroes. Along the way, zeppelins are blown up, bi-planes crashed, hearts broken, and war lays bare the true nature of both men. 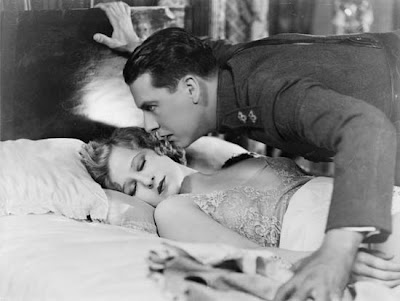 I thought I'd like this movie more than I did. Perhaps I'd wanted to see it for so long, and I'd heard so many good things about it that my expectations were too high.

The characters were decent and well-defined--I felt very sorry for the more British-than-British and honorable-to-the-bone Roy Rutledge, who gets abused by his slutty girlfriend (Harlow) and his cowardly brother, despite his loyalty to and love for both--the lines between the good guys and bad guys are clearly drawn--the German officers are shown to throw away the lives of their men with barely the slightest hesitation, while the British officers concoct dangerous schemes to weaken the enemy and preserve the lives of their troops--and the film features spectacular action sequences--the battle of the zeppelins over London is the movie's high point, but the battle above the German lines during the daring bombing run a depot far behind enemy lines.

It's definitely a well done movie, but it's a movie that's shows its age. Despite the well-defined characters and great action scenes, it, like so many of the early talkies, feels like it's struggling with the new medium of sound. The actors in particular are still performing as though they are in a silent movie, and just about every emotion and action is so exaggerated that many of them come off as being bad actors.

I think the film also suffers from the fact that extended sequences are shot using early versions of color film, which basically boiled down to everything appearing in varying tones of blue (during many of the aerial scenes) or greens and reds (like during the grand charity ball where we first discover that the love of Roy's life, Helen, is something of a slut) instead of the shades of gray that's typical for a black-and-white movie. While its impressively adventuresome of Hughes to be utilizing that technology at such an early time, it was used with such greater effectiveness in "Doctor X" that they "color" sequences mostly annoyed me than thrilled me. And I wasn't exactly thrilled by the duo-tone in "Doctor X", but they did some impressive and impactful things with the color there... here, the filmmakers just seemed to take the stance that color was enough in-and-of-itself and there was no need to get terribly creative with it.

Despite being disappointed, I still think this is a good movie, and it's a film that everyone who considers themselves a film-bluff should see. I should probably be embarrassed for not having sought it out early, but I also can't remember the last time I've seen it for sale or rent. (I'm glad I waited though, because the UCLA-spearheaded restoration I was was a spectacular work, and I recommend that you seek out that version, if you are looking for the film.)