Bava spoofs Hitchcock in
The Girl Who Knew Too Much

Nora Davis (Roman), a young American travels to Rome to visit a relative, but she's even off the plane, she inadvertently becomes involved with a drug smuggler. Then, on the dark and stormy night of her arrival, her relative has a heart attack and dies. As she rushes to the hospital, she is mugged. While trying to recover from the blow to the head, she witnesses a woman being stabbed to death, but no one believes her because the body vanishes and the rain washes away all the blood. To top it off, she is targeted by a serial killer who has remained inactive for ten years because her last name is "Davis." At least she has the handsome and virile Dr. Bassi (Saxon) to comfort her... that is, unless he's actually the insane murderer. 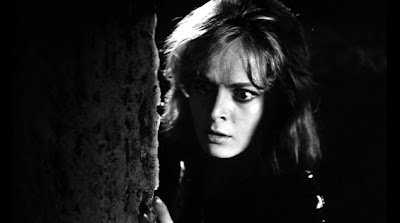 As that summary should imply, "The Girl Who Knew Too Much" has a plot that is more than a little ridiculous. I sat down to watch this movie not knowing anything about it, but less than five minutes in, I noted that Mario Bava was coming off like a poor man's Alfred Hitchcock... and then the movie went into the string of events mentioned in my summary and it almost lost me.

Until the scene in a hospital was so absurd that it dawned on me that I was watching one of the driest, drollest spoofs ever put on film.

"The Girl Who Knew Too Much" went so over the top because the film isn't mimicking a Hitchcock picture, it was poking good-natured fun at many of the elements that were Hitchcock cinematic mainstays. Later, once John Saxon's character of Dr. Bassi is firmly established, the fact the movie is a comedy is hard to miss--Bassi borderlines on a slapstick character--but the humor is for the most part very subtle and it helps to have watched lots of Hitchcock. 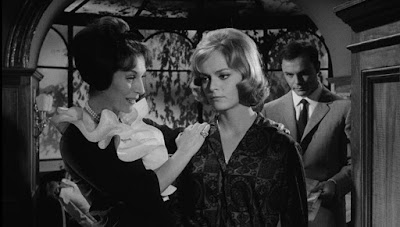 I don't know if I was just being dense or if the comedy really is that hard to pick up on, but like with other of Bava's films, there are two distinctly different versions of it--this one, which was made for the Italian audience, and "The Evil Eye", which was made for the international market and which features a number of scenes that aren't present here and which are more overtly comical. (The very informative commentary by film historian Tim Lucas on the DVD version I watched discussed the differences.)

With most of the films that Bava had a hand in writing, the script is a bit dodgy and it's obvious that he's a director who is more interested in delivering exceptional visuals than a solid story. Given that this is a spoof of a Byzantine mystery that doesn't need to make a whole lot of sense in the end, that's forgivable in this case. It's even more forgivable, because this is one of the most gorgeous, best-shot films Bava ever helmed. It takes full advantage of the black-and-white film medium, using deep shadows and highlights to their full dramatic effect. Bava's command of the film's visuals are so great that there was only one time where I rolled my eyes and wanted to reach through time and tell him and his camera man to stop calling attention to how clever and artistic they are, a reaction I usually have at least three times during a Bava film. (Cinematography-wise, this one ranks with "Danger: Diabolik!" as far as the mastery of the film medium goes.)

With "The Girl Who Knew Too Much", I'm starting to appreciate a little more why Mario Bava gets touted as a genius by many fans of B-movies. I'm still not convinced he was a genius, but this is unquestionably a gorgeously filmed movie. With a better script, it could have been a masterpiece instead of just a classic. (In fact, just as Bava provided what I am convinced was the final element that brought about the creative chemical reaction that gave birth the slasher subgenre in horror movies with "A Bay of Blood", so did he cause a genre of distinctly Italian murder mysteries to be created, the gallio. These films usually involve gruesome murders that are witnessed by the main character yet that he or she often can't prove actually happened. The main character then sets about solving the crime and catching the killer, with increasing danger and body count as the film unfold.

Whether Bava was a genius or not, "The Girl Who Knew Too Much" is a film that is a must-see for anyone who's a film student or who has an interest in film history in general. I also think it's a must-see for Hitchcock fans, because it's such a well-made spoof that it becomes a thriller that I suspect Hitchcock might have been proud of making.