'The Soilers' is almost buried by weak slapstick

ZaSu and Thelma (Pitts and Todd) try to sell magazine subscriptions to the staff at City Hall and are mistaken for assassins by a judge who's been life has been threatened (Morton). 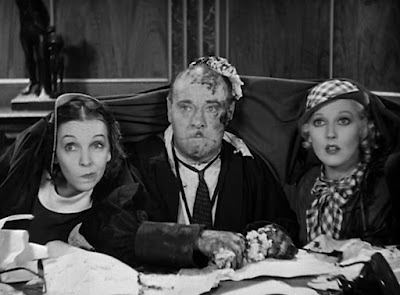 "The Soilers" is one of the weaker entries in the comedies teaming ZaSu Pitts and Thelma Todd. There's no much story to get in the way of the physical comedy bits, but at least there's more than in the similarly flawed "One Track Mind" (1933) and here enough thought was put into the script to bring the film to a satisfying conclusion. Still, compared to earlier Pitts/Todd teamings, this is disappointing.

I think the biggest flaw here is that the series started emphasizing slapstick and other physical comedy over the situational comedy that had dominated early entries in the series. In "Let's Do Things" (1932), for example, the physical comedy--Thelma Todd being tossed around like a rag doll, ZaSu Pitts being stupid drunk--accentuates the comedic situations the characters are in rather than being present for its own sake.

To make matters worse, the routines that "The Soilers" is packed with just isn't all that good, and several of them outstay their welcome. In the first ten minutes of the film there are four different physical comedy bits that are allowed to drag on to the point of being tedious, although the last of them is punctuated with an extremely impressive prat-fall by James Morton. (Two of the routines are just lame, and grow tedious because they are carried on for too long; but there's some business with characters stuck in a revolving door that ZaSu is too dim to figure out how to use, and a bit with a maintainence man and a ladder that culminates in James C. Morton doing an impressive head-over-heels prat-fall. (I am not joking; this was such an impressive little stunt that I literally exclaimed "Wow!" when it happend.)

The middle section of the film is the strongest. Here, we see Thelma trying to sell magazine subscriptions by being seductive to a court clerk, followed by ZaSu trying to prove that she can also be sexy... and failing. Some of the strongest physical comedy takes place here, as the girls reduce a judges' chambers to shambles and cover both him and themsleves in ink, glue, court documents, and bits of office equipment. It's all very goofy and even a little funny. Bud Jamison also gets to portray what may be the most inept plain-clothes policeman to ever grace the screen during this section, and it's also quite funny. Eventually, the film returns to the uninspired material that opened the film, but thankfully we only get a small dose of it, and the film does close on a high note--a literal bang--and a cute moment between our heroines and the judge whose day they've been ruining.

Although definately one of the weaker entries in the series of Todd/Pitts comedies, it's still ends up being a lot of fun to watch. In fact, I think if a little more effort had been put into crafting a story instead of padding the running time with lame slap-stick material, it could have ended up as one of the better entiries. The cast was excellent, and when they had good material to work with, they were excellent.