The most complete version of 'Pinched'

As regular readers of Shades of Gray (all seven of you) have probably noticed, I've been trawling YouTube for things to review much more than I used to. This is because the place is a treasure trove of films I otherwise would never even have realized existed... and even if I had known, I wouldn't have seen them, because I am too cheap to buy DVD collections of silent films and cartoons from the 1920s and 1930s.

Every so often, I also come across someone who is using the YouTube platform to give a gift to all us film-lovers out here, at great effort. Most recently, I came across Dave Glass's restored version of "Pinched" (1917). He assembled it from three different sources, did some digital clean-up on some sections, and uploaded what, for now at least, is the closest we'll get to seeing what movie-goers saw when they settled into their seats 100 years ago. 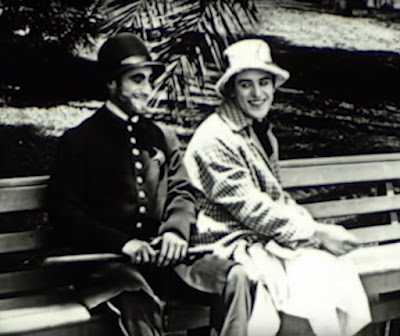 Getting easy access to an effort like this is what makes the web so great... and it's makes it even greater because of the ease I can share it with all of you, right here, at the bottom of this post.

After being framed as his own mugger (Lloyd), a young man's attempts to avoid arrest lands in him jail for ANOTHER crime he didn't commit.

Like many slapstick comedies, "Pinched" is a loosely connected series of vinettes that each revolve around one or two set-piece gags. They are tied together in this one primarily by a checkered cap that blows off Harold's head while he is out driving with his girlfriend. It's a fun idea that makes the events of film seem a little more reasonable than they might otherwise have if the main character had just wandered from situation to situation and gotten into trouble completely randomly.

Check it out; it might be the most fun you'll have today!