Musical Monday with Calloway and Boop

The early Betty Boop cartoons are very trippy experiences... but this one seems moreso than others.

Although warned of the danger by an entire town of fleeing citizens, Betty Boop decides that she must see the Old Man of the Moutain herself. 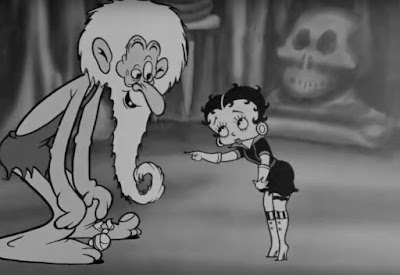 Betty Boop had some surreal adventures in the early 1930s, and this is one of them. Although you have to wonder what when through that extra-large head of hers when she chose to disregard warnings from EVERYONE (including a woman who, depending on how darkly you want to view the storyline, was either the Old Man's unhappy wife, or a rape victim), and heads up to mountain to see for herself what everyone is so afraid of, this is among the more surreal of them. From the moment Betty meets the Old Man of the Mountain, this cartoon just keeps getting weirder and weirder... and keeps getting more and more entertaining.

Another really cool aspect of "The Old Man of the Mountain" is that it's essentially a music video; it's not just a cartoon where the characters sing a song or two, it's filled from beginning to end with jazz music and songs performed by Cab Calloway and his orchestra, along with Bonnie Poe. The character of the Old Man dancing was also reportedly rotoscoped from film of Cab Calloway performing. I've read this is one of three Betty Boop cartoons where the Calloway and his music are bascially the stars; I will be seeking out those and reviewing them in this space.

Meanwhile, if you like funky animation and even funkier jazz, you need to take a few minutes out of your day to watch "The Old Man of the Mountain".