'Backs to Nature' is mildly amusing

Patsy (Kelly) convinces her friend Thelma (Todd) that a camping trip is the best, most relaxing way for them to spend their vacation. This turns out to not be the case. 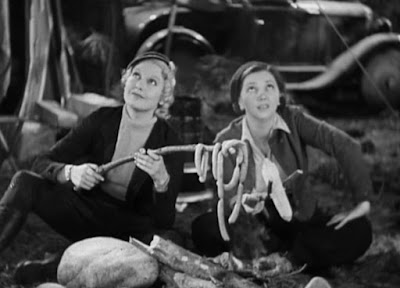 "Backs to Nature" was the second teaming of Thelma Todd and Patsy Kelly as Hal Roach's "female version of Laurel & Hardy." This outing feels like a step down from their debut, either because of a lazy script, or because of the passage of time. With one exception, all the jokes and routines are what you'd expect to find in a comedy about camping--difficulties setting up the tent, mishaps while chopping firewood, disasters around the camp fire, and prowling bears. Even worse, all of these standard jokes are in their most basic forms with no twists or elaborations. (Patsy cuts down a tree, it falls on the tent with Thelma in it. Moving onto the next gag.) I don't know whether it's that the writers were being lazy or that the 85 years that's passed since this film was released, but things are just a little too straight-forward here. I suspect it's the former, since the film just sort of ends without closing any story arcs, without even really ending. I had the same issue with the final film Todd made while teamed with ZaSu Pitts, so I'm thinking the blame here is lazy writing.

Despite the weak material the actors are working with, "Backs to Nature" is amusing to watch, due to the antics of Patsy Kelly and the reactions of Thelma Todd. As the film unfolds, you will find yourself rooting for Patsy to get something right, because she is trying so hard to give her friend the relaxing camping trip she promised, even if you know she's never going to succeed. Todd's character is the one around which the film revolves, but it's Kelly's boundless enthusiasm that makes it worth watching. (Although Todd once again manages to always look glamorous, even while being chased up a tree by a bear.)

That said, despite the appealing nature of Patsy Kelly's character, the way Todd's character interacts with her ends up being one of the elements that undermines the quality of this film, and, once again, makes me blame lazy writers rather than the passage of time for its failings. There is literally only one moment of warmth and camaraderie between the two, with almost every other interaction being one where Todd is irritated or angry, and Kelly is making excuses or apologizing. Despite both actresses being appealing and playing sympathetic characters, I couldn't buy that these characters would barely tolerate each other at work, let alone be friendly enough to go on vacation together.

It the final analysis, "Backs to Nature" is at the low end of average; it's not terrible but there are better films to spend your time on. It is one of 21 short films included in the three DVD set, The Complete Hal Roach Thelma Todd & Patsy Kelly Comedy Collection, (only 18 of which actually feature Todd as well as Kelly), and it's neither an argument for or against getting the collection. It's harmless filler, at best.