'The Electric House' will spark laughter

A botanist (Keaton) is mistaken for an electrical engineer and is hired to install electricity in a millionaire's mansion. He goes above and beyond the call of duty and turns the house into a mechanical marvel that puts the smart-houses of 2019 to shame... but then the engineer who should have had the job (Murphy) decides to take revenge. 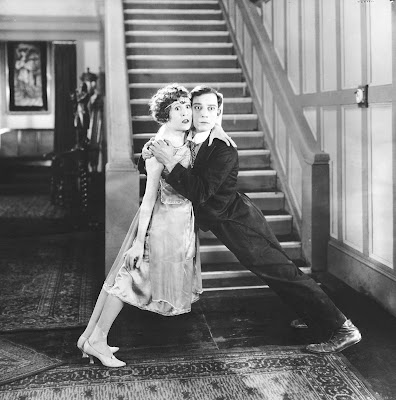 "The Electric House" is a tour-de-force of set building. The devices and the prop comedy around them are the real stars of this picture, and the film starts to drag when it strays from this, like the bit where Keaton struggles with a heavy trunk. While this sets up other gags, it feels like filler, which is a bad thing in a movie that only runs a little over 22 minutes.

That sequence, though, is the only real quibble I have with the picture. I have a few nitpicks with how long it took Keaton's character to catch onto the sabotage (which is mostly excused by the way he ultimately deals with the saboteur), as well as some of the business at the end (which is almost made up for by the film's final moment), but over all, this is an enjoyable picture. It doesn't have that frenetic feeling that my favorite Keaton films convey, but it is still a heck of a lot of fun. (It's also interesting to see that diploma mills have been around for at least 100 years, because without an indifferently run university, the story of this movie would not have taken place.)

But just don't take my word for how fun "The Electric House" is. I've embedded it below, via YouTube, for your viewing pleasure!