The Arabiantics of Felix the Cat


Felix the Cat trades a bottle of milk for a magic carpet that flies him to the cartoon version of the Middle East. Here, he becomes fabulously wealthy, but his treasure is stolen by an evil sultan and trained mice. Naturally, Felix comes up with a scheme to regain what is his. 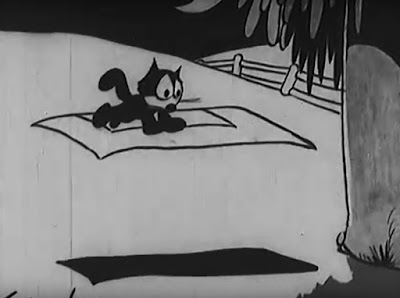 During the mid- to late 1920s, Felix the Cat was a hugely popular figure, and his cartoon and comic-strip antics were beloved by kids and adults alike. (How do we know Felix was loved by adults? Well, these photos of Felix dancing with a scantily clad honey seems to be a pretty good indication.) As sound arrived, Felix's popularity with movie-goers was waning, and by the mid-1930s, he was gone from Hollywood. He continued his adventures in the funny papers and in comic books well into the 1960s, however, and continues to see occasional revivals to this very day. Even if you haven't seen a single Felix the Cat cartoon or comic strip, chances are you've seen his smiling face at one point or another. (More on Felix here, at Wikipedia.)

Personally, I'm not a big fan of Felix the Cat, because in many of the cartoons, he goes too far out of his way to be jerk. However, I love the surreal universe he exists in--where he can pluck elements from the background scenery and turn them into weapons, a musical instrument, or even a car--and the strange place he occupies between a cat walking around on four legs and a full-blown anthropomorphic Disney character, so I seek them out occasionally to find one to my liking.

And "Arabiantics" turns out to be very much to my liking. This is a rare Felix outing where he is a sympathetic character from beginning to end.

As the cartoon opens, he's a stray cat looking for somewhere comfortable to spend the night (but doesn't find it), and just when things are looking up for him, his well-earned treasure is stolen and he's worse off than he was at the beginning of the film. The methods by which he goes about regaining his treasure are funny and clever and almost entirely free of the mischievous malice that is so prevalent in other Felix cartoons I've viewed. What's more, every gag in this film is either sweet, hilarious, or hilariously weird.

I've embedded the cartoon for your viewing pleasure below. I hope you enjoy it as much as I did!