'Alum and Eve' brings chaos to the hospital

Thelma (Todd) tries to lie her way out of a speeding ticket by telling the highway patrol officer (Morton) that she was rushing her sick friend (Pitts) to see a doctor. When the officer kindly offers to help by giving a police escort, a of events are set into motion that throws an entire hospital into chaos. 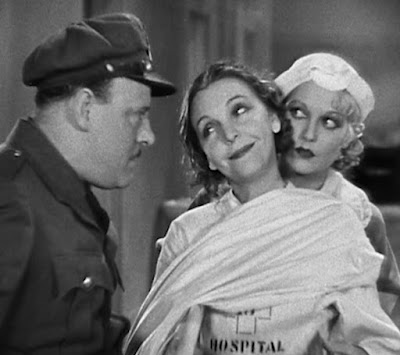 "Alum and Eve" has a set-up that we've seen in other Pitts/Todd/Kelly comedies--the ladies are out driving and trouble ensues (like in "The Old Bull" and "Beauty and the Bus")--but this one takes a crazier and darker turn than an in any of the shorts in this series I've seen so far. This is one of those films where I can't go into to many details without ruining the viewing experience, but I think that if Hal Roach had hired H.P. Lovecraft to write a comedy starring Pitts & Todd, it would have turned out something like what we have here: What starts as a simple lie swiftly descends into a hilarious chaotic madness and doom!

Although I count this one among the best Pitts/Todd teamings I've watched so far (which is about half of the ones they made together), its flaws are pretty big. Primarily, there are a couple slapstick scenes go on for too long. First, there's a bit  where the ZaSu Pitts character is being manhandled by James Morton's highway patrol officer in an effort to get her into the hospital, but Pitts is replaced by a poorly concealed body-double which all but ruins the scene. This is followed almost immediately with a sequence involving the three stars, two orderlies, and a nurse, all tangled up in a gurney; it starts out mildly amusing, but becomes boring and dumb as it drags on. Both of these are within the first five minutes of this 18-minute film... which left with with low expectations for what was to follow.

"Alum and Eve" gets much, much better, however. Once the characters are either causing mayhem in the hospital examining rooms, or our two heroines are trying to escape before ZaSu is either subjected to some unpleasant and unnecessary medical procedures or Thelma is hauled off to jail for lying to a police officer, this is one funny movie. While I was particularly appreciated the insane, dark humor at play here, I am also very fond of a gag where Thelma Todd scampering around in her slip (since she, once again, manages to lose her clothes) brings about a medical miracle. As for the the performances by the various actors in the film--everyone is great in their parts. This is another one where Todd and Pitts get to play to their strengths as performers, and every member of their supporting cast is perfect in their roles. The chemistry between Pitts and Todd on-screen also makes it perfectly believable that not only would ZaSu continue to play along with Todd's increasingly outlandish stories as to why she needs to have medical treatment, but that Todd will also make every effort to extract her friend from the situation she's gotten her into.

This is one of 17 short films that ZaSu Pitts and Thelma Todd made together, and they've all been collected into a single DVD set. It's one of the reasons you should pick it up, especially if you've enjoyed more famous Hal Roach productions, such as the short films starring Laurel & Hardy or Harold Lloyd.


Trivia: The Alum of the title (and a major part of the action during the final third of the film), is a compound that was used to cauterize cuts, because it causes skin to tighten. (I looked it up, so I thought I'd share this tidbit.) I've no idea if it still used medically today, but it apparently is still used in home-made preserves and pickling.
Posted by Steve Miller at 8:02 PM