The first outing of a legendary comedy team

Thelma and ZaSu (Todd and Pitts) go on a double-date with ZaSu's deadbeat boyfriend (Byron) and his boorish doctor friend from Boston (Mandy). The night goes from bad to worse when Thelma initiates a scheme to bring it to an early end, and ZaSu accidentally gets drunk on the doctor's homemade "medicine." 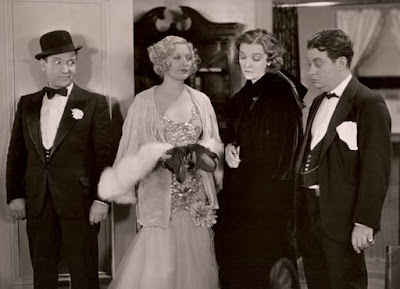 "Let's Do Things" was originally produced to be part of "The Boyfriends" series of comedy shorts, but it must have been immediately apparent to everyone involved that there was something special about the teaming of Thelma Todd and ZaSu Pitts, because this instead became the launch of a new series centered on them.

Thelma Todd and ZaSu Pitts are a working women who are friends and roommates away from the job. In an example of deft writing, their relationship is established with a few lines, even as their characters are delineated: They moved to the Big City with the idea of finding jobs that would lead them to snare wealthy and influential boyfriends. Todd is the more ambitious, organized, and clear-eyed of the two, while Pitts is a naive romantic who stumbles her way through life, both literally and metaphorically.

The characters that Pitts and Todd portray in this film (and the entire series) are obvious from their types... Pitts, a veteran comedienne who got her start in silent pictures, is the gawky, befuddled. socially inept of the pair; while Todd, a beauty contest winner turned actress, is the attractive, sharp-witted one. However, in an atypical move--and one that takes full advantage of both actresses talents, Todd isn't just the "straight man" for Pitts to play off, but is just as likely to be delivering jokes and otherwise clowning it as Pitts is. In fact, some of the funniest physical comedy in the film involves Todd getting the world's worst chiropractic adjustment, and her being tossed around the dance floor like a ragdoll... before turning the proverbial tables on her dance partner and sending him flying.

As funny and well-written the material performed by Pitts and Todd is, the humor is augmented by the fact that the boyfriend characters are not bland cyphers (as often seems to be the case in films from this period) but are instead almost as complete characters as Thelma and ZaSu which makes the gags even funnier. It also doesn't hurt that both are played by veteran comedians, George Byron and Jerry Mandy.


"Let's Do Things" is included in a two-DVD set that contains all the short films that Pitts and Todd made together. If they're all as much fun as this one, it's going to be great pleasure watching and reviewing them.