It's the end of the road for Hildegarde Withers

Oscar and Hildegarde (Gleason and Pitts) are enjoying a night at the theatre when not one but two murders happen during the show... the second one taking place on stage, in full view of the entire audience and cast and crew backstage. 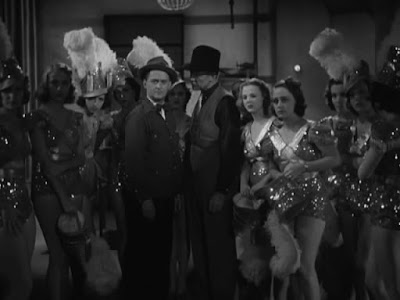 This was the last of the Hildegarde Withers films, and it is also the weakest. While it's not terrible, it is far down the quality scale from where the series began with "The Penguin Pool Murders." Where there is plenty to like here, the good does not quite outweigh the bad.

First, the good: Someone working on the film during pre-production finally remembered that Oscar and Hildegarde are involved in a relationship, and they used it as a central motivator to get the story started. Also, the film has a strong supporting cast, with Tom Kennedy (basically playing the same dumb cop he portrays in the "Torchy Blane" series), Joan Woodbury (at the height of her B-movie stardom, playing an actress who was in a love triangle between the first murder victim and the show'd producer, a friend of Oscar's), and Marjorie Lord (at the very beginning of her career in a small but crucial part) shining particularly brightly. In fact, Kennedy is so amusing in this picture that I found myself wishing that he was star rather than James Gleason.

And that takes us to the bad. While the writers may  have remembered that Oscar and Hildegarde are a couple, but they forgot they were intelligent people, and that they worked as a team (mostly) when solving crimes. That has been completely lost in the script for "Forty Naughty Girls". What has also been lost is any unique flavor that was present in previous installments of this series. While the Hildegarde Withers films were always B-movies, this is the first one that felt like it was just another cheap mystery/comedy, with a dumb cop bumbling his way through his "investigation" while a clever trickster actually solves the crime. (Except in this case, the trickster--Hildegarde--is just as big a bumbler as Ocsar is portrayed as.) Oscar spends the movie making wild accusations with almost no evidence--and is proven wrong either by himself or other characters, while Hildegarde pratfalls her way to uncovering clues. While amusing--especially since the comedy does play to ZaSu Pitts' strengths as a performer--it doesn't serve the characters nor the Hildegarde Withers series well. It doesn't even serve the film itself well but just drags it down.

"Forty Naughty Girls" could have been a very clever mystery where the main characters have to solve a double murder in real time, as the musical the film is named after unfolds on stage. It also had all the pieces to return the characters of Oscar Piper and Hildegarde Withers to the height of dorky coolness they were at when the series started. Heck, given the strong supporting cast, this film had all the elements to make it the best in the series. Instead, all those quality ingredients were slapped together lazily and sloppily and the end result was just another generic 1930s comedy-mystery... and instead of going out on a high note, the "Hildegarde Withers Mysteries" series ended almost as bad as it got. (It's better than "Murder on the Bridle Path", but only because it's funnier.)