Horror movie giants at their best

In this loose adaptation of a Robert Louis Stevenson short story, a young medical student (Wade) becomes drawn into the twisted relationship between a brilliant but coldhearted surgeon (Daniell) and a strange coachman who moonlights as a body snatcher to provide the doctor with research specimens (Karloff). 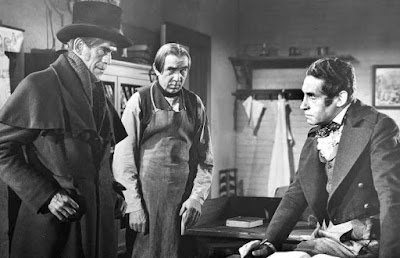 "The Body Snatcher" is a one-stop spot to discover why producer Val Lewton, actor Boris Karloff and director Robert Wise are held in such high regard by horror movie fans and filmmakers.

Lewton's touch is all over this film, and there is barely a scene that doesn't feature terror technqiues that filmmakers copy and rely on to this very day. Karloff gives one of the very best performances of his career, oozing greasy charm and quiet menace with every word and gesture. And then there's the very chilling scene where he's just choked a man to death, is sitting over the corpse, and then reaches out to stroke his pet cat. And, finally, Wise mounts a brilliantly structured film where the mystery and tension keeps mounting until the end, and every scene is perfectly paced, framed and lit. Much gets said about film noir, but the use of light and shadow in black and white horror films like this one is far more important that in crime dramas, and here Wise uses the medium to perfection.

And, of course, the stars are backed up by an excellent supporting cast, including Bela Lugosi in his final horror role for a major studio. Lugosi's role is small, but he brings a level of raw creepiness to his character, creepiness born more of stupidity than the evil that wafts from Karloff's character.

In retrospect, the fact that Lugosi dies in a very key scene in the film is something of an allegory for his career, as well as Karloff's. In the scene in question, Lugosi ends up dead on the floor and Karloff reaches out to pet a cat in a very creepy moment. This was the second-to-last film Lugosi made for a major studio, and his career and life were mostly a downward spiral from here, while Karloff's career in horror films continued to flourish.