Paradoxically, the parts of this movie that haven't aged well are among its best parts

Lucky Downing (Morris), a down-on-his-luck business-owner receives financial salvation when he is offered $1,000 to become and stay engaged to heiress Elinor Fairchilde (Smith) for one month.. When he arrives for his strange assignment, he finds himself the target of a supposed ghost that has eliminated Elinor's previous two fiances, as well as one point in a love triangle between the chilly-demeanored heiress and the sassy newspaper reporter Lili Barstow (Marshall). 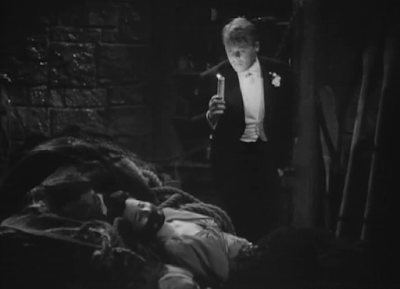 "The Smiling Ghost" is an example of the "dark old house" genre where an assembly of strange characters surrounding an innocent young woman are stalked and killed by a mysterious killer. This being, first and foremost, a comedy, it picks apart and mocks the conventions of the genre, but it does so with a mischievous smile rather than a malicious one.

The story is bit uneven, with some sections being so predictable they're not interesting (let alone funny), and others being clever enough to have been included in a straight-laced thriller. The one thing that's consistent throughout, however, is the witty and finely tuned dialogue throughout the film. The jokes are funny, and each character has their own unique way of talking. Unfortunately, some of the actors and actresses delivering the lines are in some cases not up to the task.

The film's hero, for example, is a dead spot throughout. Wayne Morris is good looking and has a charming air about him, but he is absolutely, totally bland. He's present and delivers his lines, and he's obviously trying, but he just doesn't have the presence to carry the lead in the film. The same is true of Alexis Smith, who probably never should have  been cast in the role of a character who is either the victim of a haunting or some sort of lunatic who's bumping off her would-be husbands. I think she was trying ti give her character a wounded, aristocratic air, but she mostly comes off as detached and bored with being in the film. Morris and Smith drag the film down, I think, because they were cast in parts beyond their ability to manage. 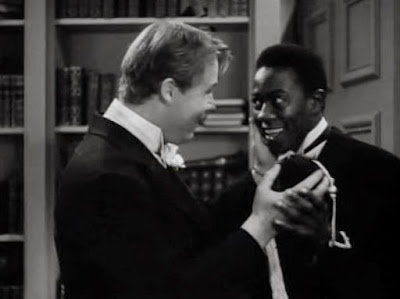 On the other hand, Morris is outshined in every scene by his sidekick, Willie Best. Best is energetic, funny, in in perfect pitch with the mostly zany tone of the picture. What's more, the film makes it clear that Best isn't Morris's servant or employee, but instead a loyal friend and partner. Best masquerades as a servant, because, by the standards of the time it would be unseemly for a white "man of business" to be best friends with a black man--something which itself becomes a source of humor in the film--and the warm relationship between the two makes Morris's character more interesting. Unfortunately, as the film progresses, Best's character slips further and further into the "superstitious panicky darkie" that was a mainstay of films back then. Even while portraying this obnoxious stereotype, Best is lots of fun to watch, and, given the way the character was established, I can't help but wonder if the shift wasn't born from what audiences expected from their comedies back then. (As I observed in my review of "Lucky Ghost", even films made expressly for black audiences contained these stereotypes which cause so much indignation in modern viewers.)

"The Smiling Ghost" is one of eight obscure B-movies found in the eclectic "Warner Bros. Horror/Mystery Double Features" collection. Some of the films in the set are better than this, others are worse. I'll get around to covering all over them in this space, eventually.