'The Penguin Pool Murder' is a great start for Miss Withers

When a wife-beating, crooked stockbroker (Usher) is murdered, his wife (Clarke) and her one-time boyfriend (Cook) are the obvious suspects. Sharp-eyed and sharp-tongued school teacher Miss Hildegard Withers (Oliver), who found the body, thinks there's more to the situation, and she badgers Inspector Oscar Piper (Gleason) to keep digging into what seems like an open-and-shut case. 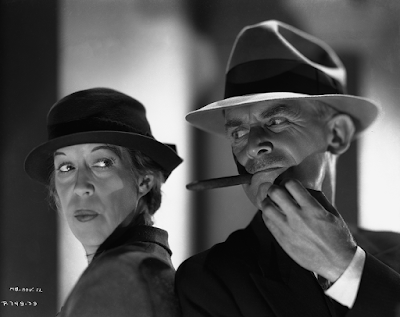 "The Penguin Pool Murders" is a breezy mystery with a cast so charismatic and likeable that one almost forgets the dark subject matter at its heart--spousal that may have led to murder. Because the cast is so likeable, I also find myself forgiving the film for, essentially, being a one-suspect mystery, and becoming evenmoreso when the character that I zero'ed in on as the murderer almost immediately starts becoming super-helpful with the investigation; the film is simply too much fun for that flaw to drag it down too much.

Another strength of the film is the interplay between the two main characters, Miss Withers and Inspector Piper. They start out with obvious disdain for each other, but when they realize that each is actually much smarter than they initially gave each other credit for, you can see the mutual respect develop between them... and by the end, romance is in bloom. (And speaking of romance, the *obvious*--the one we expect from this film--involves a couple nice twists that also make this film stand out.

"The Penguin Pool Murder" was the first of six films with Gleason as Inspector Piper, and of three with Oliver as Miss Withers. I hope every entry in the series is as strong as this one.