The Moonshiner's Daughter: Cute but not a 10

When Pa Catfield (Simpson) killed the last Ratfield, it seemed the generational feud that had bathed Wolf Mountain in blood for so long was finally over. But when a Revenuer (Hopton) turns out to be a Ratfield AND becomes romantically involved with the lovely Emmy Catfield (Browne), a whole new feud begins. 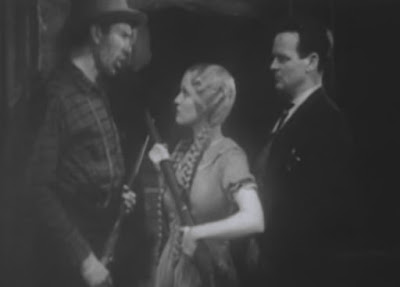 Produced as a fund-raiser by the Masquers, which was a social club for comedians in Hollywood, "The Moonshiner's Daughter" is a mildly amusing comedy that's packed full of one-liners and slapstick from beginning to end. There aren't any laugh-out-loud moments--although the baby has some moments that come close--but there aren't any dull ones either. It's a competently staged spoof, but that's about it.

That said, one of the things I found the funniest about the film is the fact that the government agent is clearly wearing his badge on his coat for the entire film, even when he's telling the mountain-folk that he's not a revenuer, no sir. I am also very fond of the second title, being the lover of bad puns that I am.

The best moments in the film are when there's interaction between Russell Hopton and Lucile Browne. The two play well off each other, and it's a shame that they do not appear to be done any other films together. One wonders what might have been if they'd been paired in something more than a quickie short film.


Trivia: There were at least three other short films titled "The Moonshiner's Daughter" prior to this one (four if you count one titled "The Mountaineer's Daughter" that had it as an alternate title. They were all silent films (from 1910, 1912, and 1914 respectively). Although the ones information is available on had plots very different than this one, it could be that this was a wide enough sub-genre back then that audiences in the early '30s were amused by elements in this film that are muted today.