Should have been titled
'Ring of Terminal Boredom'

A dippy graveyard caretaker (Green) relates a deadly dull tale of a medical student (Mather) who experiences the ultimate terror... and offers the viewers the experience of ultimate boredom. 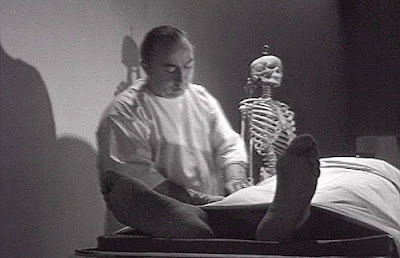 "Ring of Terror" is a film with NOTHING to recommend it. From its cast of "college students" (who are being played by actors in their late 30s or early 40s, yet who are talking and acting as though they are in the late teens or early 20s, and thus making the viewer feel deeply embarrassed on their behalf... the lover's lane make-out scene is particuarly painful) to the utter lack of talent shown by anyone in the film's cast or crew, there is simply nothing good here. It's as if a group of actors whose career pinnacle had been roles in those lame public health/educational films from the 50s wrote a script outline on a napkin from the strip-club they were working at, rented a camera, and ad-libbed an atrocity of movie-making.

I've seen better acting at the first rehearsals for high school plays, and I've written better stories on a moment's notice. Don't waste your time with this one.

If you want to check out this movie just to verify I'm not exaggerating, I suggest you get the DVD multipack I've linked to below. That way, you're not out much cash AND you've gotten yourself a couple of decent films at the same time.