A cop gone bad is 'The Man Who Cheated Himself'

Homicide detective Ed Cullen (Cobb) puts his skills to use to cover for a killer when his married girlfriend, Lois (Wyatt), guns down her husband. But will he be able to keep the deceit hdden from his new partner, a bright rookie detective who also happens to be his brother (Dall)? 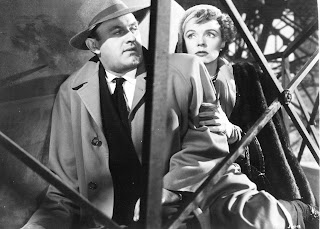 "The Man Who Cheated Himself" is a very well-done movie. It's got a nice, dramatic script of the film-noir variety that unfolds in a mostly believable fashion and at a perfect pace; it's got well-crafted dialogue being delivered be competent actors giving believable performances; and it's got a detective who actually works a mystery without the aid of plot-aided leaps of logic. It might be worth an 8-rating if the set-up didn't feel a bit forced.

Perhaps it's misplaced gallantry on the part of Cullen, but given the cirucmstances of the killing he witnesses, the smart (and even the only rational) thing for him to have done was to report the shooting Yes, there would have been scandal, but even as soon as immediately after the shooting, Cullen could provide all the evidence a competent lawyer would need to get Lois off scott-free: The husband was planning to kill her and the shooting was a cross between accidental and self-defense... and Cullen should have been smart enough to let things stand as they truly were.

But, if Cullen didn't try to disconnect Lois from the crime, there wouldn't be a movie (or, at least, there would have been a very different movie). Despite its shaky foundation, "The Man Who Cheated Himself" delivers plenty of entertainment for fans of film-noir and classic crime dramas. (The cat-and-mouse sequence near the Golden Gate Bridge--and the use of San Francisco as a backdrop in general--goes a long way to make up for the main character's odd behavior to get the story going.)

"The Man Who Cheated Himself" is one of a couple dozen classic thrillers and detective films included in the "Dark Crimes Collection," a box of 50 black-and-white movies. It has, sadly, been discontinued by the manufacturer, so if you know someone who's just recently discovered the magic of old films, you might want to give him or her an instant collection of them before it's completely off the market.