'A Day at the Races' was a crazy time!

A crooked businessman, J.D. Morgan (Dumbrill), threatens to foreclose on a sanitarium operated by young Judy Standish (O'Sullivan). Her fiance (Jones), friends (Chico Marx and Harpo Marx), and a horse doctor-turned-conman (Groucho Marx) launch a variety of schemes to save her business, ranging from attracting new clients, securing investments from a rich patient (Dumont) to winning a horse race that is being fixed by the greedy Morgan. 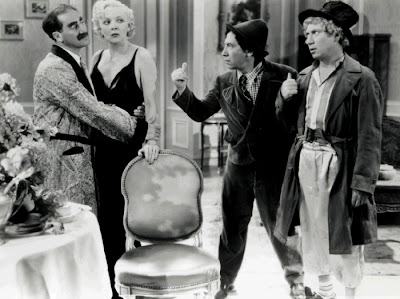 "A Day at the Races" is a great film featuring a comedy team that I feel has never gotten quite the degree of recognition they should have. The Marx Brothers were making anti-establishment comedies thirty years before they became all the rage and they were doing it with more wit, grace, and insanity than just about anyone has been able to match. (I think that only Mel Brooks has come close.) What's even more remarkable is that they were making their movies in an environment that was becoming increasingly friendly to fascist and authoritarian ideals, a move that was only halted when Americans woke up to the truth about Hitler and the like. (Too bad current mass-media and politicians seemed to have forgotten that lesson, what with their increasingly obvious love for totalitarian regimes and philosophies that like the color red.)

The story of the film isn't really that spectacular, but then it's just there to serve as a platform for the Marx Brothers to throw spears at authority figures (and whether it's doctors, bankers, lawyers, or business magnates, they all get poked during the course of this film) and as a vehicle to get us from one excellent comedic set-piece or musical number to another.

Highlights of the film include the craziest medical exam ever caught on film a perfectly timed Vaudeville-style routine where Groucho's fast-talking character is conned by Chico's deceptively simple immigrant salesman of ice cream and racing tips; a scene where Chico and Harpo use extreme measures to stop Groucho's hormones from leading him into a trap laid by the bad guys and baited with the sanitarium's and a fun musical routine where Chico and Harpo demolish a piano by simply playing in, transforming it into a harp for Harpo to play; and a great jazz routine that showed African Americans in a way that they weren't often seen in 1930s cinema.

"A Day at the Races" is a true comedy classic that is as funny today as it was seventy years ago. If you enjoy well-made satire, razor-sharp dialogue, and perfectly executed physical comedy, this is a film you need to check out.