'His Girl Friday' is a true comedy classic

While attempting to score an interview with a man slated for execution the next morning, an unscrupulous newspaper editor (Grant) juggles politics, yellow journalism, and a desperate attempt to prevent his ex-wife and former top reporter (Russell) from marrying an insurance salesman (Bellamy) and quitting the newspaper business. 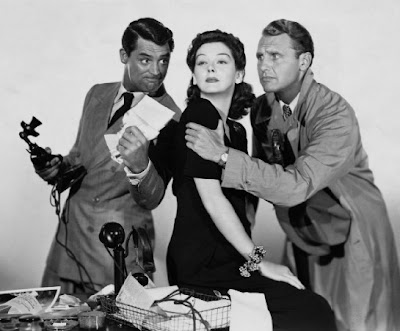 "His Girl Friday" is a comedy on speed, cocaine, crystal meth, and just about any other upper you can think of. It's crammed wall-to-wall with jokes, gags, and lampooning of crooked politicians and ruthless journalists, and you'll have to watch the movie twice to catch them all, because your laughter will drown out a fifth of them on the first time through.

This is one of the fastest paced movies ever made--it never pauses once it gets going, but speeds along at a mile a minute, with characters always doing two or more things at the same time and several actors usually talking over each other at once. It's a chaotic film--perhaps even a little chaotic for its own good at times--but every joke is funny and every actor featured gives a great, high energy performance. (Russell and Grant are particularly noteworthy. Russell manages to play a character who is as tough as her male counterparts yet is still feminine and sexy, while Grant plays a man who is a complete bastard, but he still keeps the character likable and charming.)

"His Girl Friday" is a true comedy classic that remains relevant nearly seventy years after its first release, because, if anything, politicians and reporters have gotten even more slimy and callous than they were in 1940.